Even on Two Wheels, the Thrustcycle Will Never Tip Over 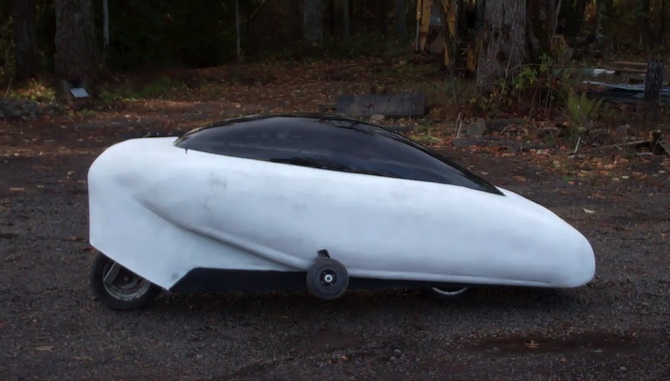 Meet the Thrustcycle, a two-wheeled EV that relies on gyroscopes to stay upright and a flywheel for acceleration. If it ever becomes street legal, it’ll be like nothing else on the road — and it’ll never fall over.

At first glance, the Thrustcycle appears to defy gravity, balancing its 500 pounds on just two wheels. The secret to it remaining upright lies in a combination flywheel/gyroscope assembly located in the rear of the vehicle, which maintains lateral stability in direct proportion to opposing forces. Whether it’s sliding into a tight corner or getting hit by a car (or a foot, like in the video below) the gyroscope will keep the Thrustcycle standing even at a stop.

That flywheel/gyroscope assembly also recovers energy and assists the Thrustcycle’s LiFePO4 battery pack during starting and acceleration. Drivers can “tap in” to the gyroscope’s energy for bursts of speed without draining the batteries or destabilizing the vehicle, according to the designer. The Thrustcycle also features regenerative braking, and stores that energy in its flywheel kinetic energy recovery system (KERS).

“It’s unlike any driving experience,” said creator Clyde Igarashi, who said the gyroscope gives the small vehicle a feeling of weightlessness. “It’s a bit like gliding on land.”

Top speed with an average adult passenger is about 70 miles an hour, and steering is in the rear wheel. Igarashi said that setup was chosen to prove that even a two-wheeled vehicle with rear steering could remain stable with the proper use of gyroscope and flywheel, though the setup could also be applied to more conventional cars, trucks and even boats.

“We will start by customizing more conventional front-steered vehicles to individual specs,” he said. Expect to see a scooter in addition to a more advanced Thrustcycle with an improved carbon fiber body and turn signals.