What’s the best way to take a sample from a violently speeding comet? One that’s doing cartwheels through the cosmos, spewing out chunks of rock and speeding through the solar system at 150,000 miles an hour?

Landing on its surface sounds like risky business, so engineers at NASA’s Goddard Space Flight Center are working on a harpoon gun that can spear the heart of the comet, collect a sample of subsurface dirt in its tip and reel it back into the hovering craft.

To that end, the Goddard lab now houses a monstrous six-foot-long crossbow, with a bow made from a pair of truck carriage springs, and a string made from a half-inch-thick steel cable. This industrial-strength ballista can generate a level of force up to 1,000 pounds.

The engineers only point the bow towards the floor, for safety reasons. “It could potentially launch test harpoon tips about a mile if it was angled upwards,” said NASA’s Bill Steigerwald in a press release.

The engineers are also building a special arrow, with a collection chamber secreted away inside a hollow tip. “It has to remain reliably open as the tip penetrates the comet’s surface, but then it has to close tightly and detach from the tip so the sample can be pulled back into the spacecraft,” explains Donald Wegel, lead engineer on the project.

During tests, the harpoon can penetrate a 250 liter drum of dirt. These are materials you’d likely find on a comet. Things like sand, salt, pebbles or a mixture of the lot. “We’re not sure what we’ll encounter on the comet — the surface could be soft and fluffy, mostly made up of dust, or it could be ice mixed with pebbles, or even solid rock,” says Wegel.

Comets — frozen balls of ice and dust, which are cosmic leftovers from our solar system’s birth — are an interesting prospect for research. Nasa’s Stardust mission previously found amino acids in various carbon-rich meteorites and samples of the comet Wild 2. These molecules are needed to build proteins, and are a key ingredient to making life.

That research gave credence to the theory that some of the building blocks of life on Earth were seeded from space, on comets. “One of the most inspiring reasons to go through the trouble and expense of collecting a comet sample is to get a look at the ‘primordial ooze’ — biomolecules in comets that may have assisted the origin of life,” Wegel said in the release.

NASA has already got a mission to return a sample from an asteroid. it’s called Osiris-Rex (Origins, Spectral Interpretation, Resource Identification, Security — Regolith Explorer), it recently won funding and will blast off in 2016. But it will only collect surface material.

The surface of a comet can be altered by the harsh environment of space. So this proposed harpoon system would plug the depths of a comet’s stomach and pull out its secret ingredients — without ever needing to land on the rock or drill down into its crust.

The engineers will continue their proof-of-concept work in the lab, and then apply for funding to develop an actual instrument. 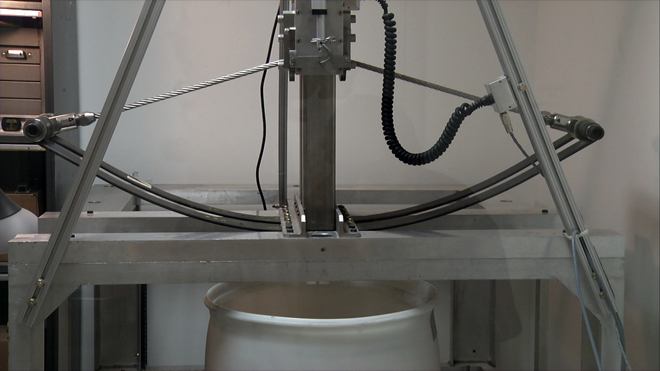