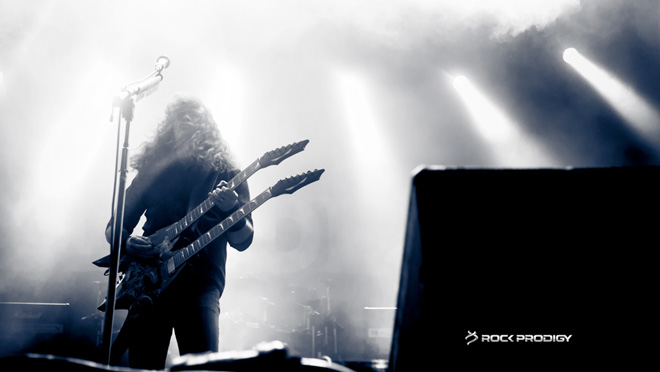 New app Dave Mustaine: Guitar Prodigy teaches you how to play like the Megadeth shredder.

All kinds of products aspire to be “for everyone” — all readers, all users, all children, all kiteboarders, all whatever. Rarely are these claims accurate, because most things are not really one-size-fits-all. However, when it comes to appealing to guitarists of varying skill levels, Dave Mustaine: Guitar Prodigy succeeds.

Granted, this app is geared toward fans of the heavy metal band Megadeth, for which Mustaine is the lead singer and guitarist (others should check out the general version of Rock Prodigy). But if you’re into Megadeth and want to learn how to play it, this iOS app will come through.

Unlike many music apps, Dave Mustaine: Guitar Prodigy is not a toy. Guided by Mustaine’s own voice, you can actually learn everything about playing these songs, even including how to hold your guitar. It works with acoustic guitars (using the mic on your iPhone, iPod Touch or iPad — or a headset mic attached to one of these) or electric guitars (in which case you plug straight in to the iOS device).

“Better than a private lesson, and more fun than any guitar game, my app, Dave Mustaine: Guitar Prodigy, actually teaches you how to play guitar, and with the leader boards you shred while you kick your friends’ *sses,” said Dave Mustaine in a statement provided to Evolver.fm (see our full interview with Rock Prodigy at the bottom of this review). 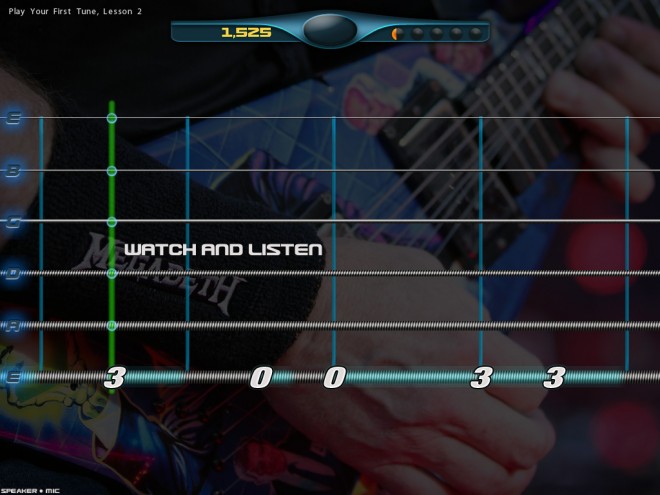 The Dave Mustaine: Guitar Prodigy displays songs in a format that will be familiar to Guitar Hero players. This tune is relatively easy.

The main interface is a bit like the Guitar Hero videogame, as one might expect — and this is a good idea, because for a generation, the two concepts are inextricably woven together. However, instead of tapping plastic buttons, you’re playing a real guitar.

It takes a little while to get used to the notation (which works best on the iPad), but you can probably gather how it works from this screenshot. The numbers (as seen in the screenshot above) represent which fret you’ll need to hold down on each string.

Things get a bit more complicated with trickier guitar parts, but you can still tell what’s going on (see image at right.) 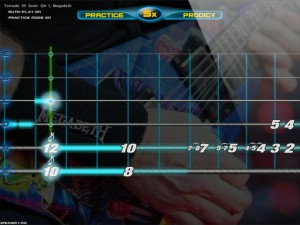 This one is harder.
Screengrabs: Evolver.fm (click to enlarge)

The developers at Rock Prodigy (one of whom we met at SF Music Tech) appear to have thought of everything — how to let you pause lessons; rewind and fast-forward by swiping the screen (crucial, because you’re going to need to play some of these parts many times through in order to learn them); check note and chord names; tweak the mix between your guitar and Dave’s; slow down the song; loop sections; flip the fretboard over to lefty mode; and even take a break to tune your ax with an in-app guitar tuner.

Like we said, this isn’t a toy — but it’s also a damn sight more fun than we remember most music lessons being. You can learn at your own pace, and, it must be said, learning guitar this way does feel fun in the way that a videogame is fun. As if to prove that point, the app is compatible with Apple Gamecenter, which can track and share your progress.

Want to raise the next guitar prodigy? Lock your kid in a room with a guitar, an iPad and this app, and wait a few months. Or, if you want to brush up on your own skills, and love Megadeth, it’s certainly worth the $10 asking price.

To find out more about this impressive app and Rock Prodigy’s future plans, Evolver.fm interviewed Harold Lee, CEO of Rock Prodigy. (The interview that follows has been edited for length and clarity.)