Darpa: Use Tobacco To Save Soldiers From Nerve Gas 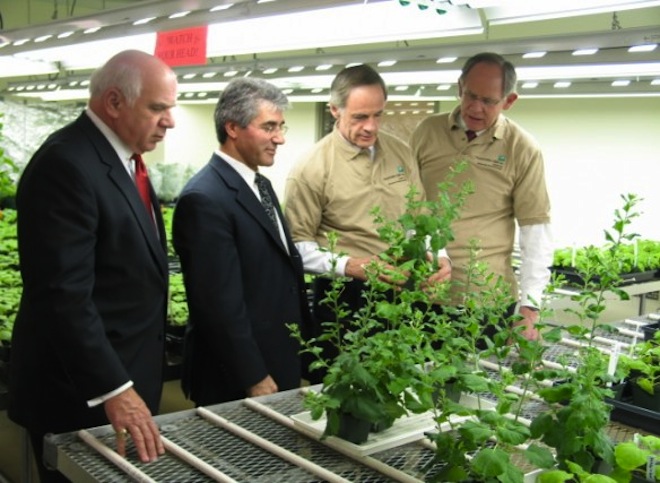 For years, the agency’s been trying to come up with better antidotes for all kinds of chemical threats and other weapons of mass destruction. Recently, it’s thrown money into a project that’d stave off widespread outbreaks by culling an infected person’s antibodies. It’s even trying to come up with insta-vaccines that can thwart just about any bug. Detecting chem and bio-threats before they wreak havoc is a top priority, too: Nano-sensors and cyborg bugs are both in the running to sniff out hazards.

But obviously, Darpa’s portfolio of chemical threat programs wouldn’t be complete without liver enzymes inside tobacco plants. The agency this week announced plans to start studying the potential for butyrylcholinesterase — you remember that one from the SATs, right? — an enzyme found in the human liver, to act as a better antidote for nerve agents.

Current antidotes don’t actually break down nerve agents. Instead, they target the symptoms of neurotoxicity, which include convulsions, vomiting, wheezing, and (of course) death. And they’re accompanied by plenty of side effects — blurred vision, heart palpitations, incapacitation and delirium. Darpa wants an antidote that can be administered in combat without knocking a soldier out of commission.

Crazy as it sounds, the agency might actually be onto something with this one. Preliminary research suggests that butyrylcholinesterase acts as a “bioscavenger.” Bioscavengers troll the blood stream for invaders and bind with nasty chemical agents, then breaks them down to their constituent parts before they can target the nervous system. Safety studies using butyrylcholinesterase have shown that medicinal doses of the enzyme are well-tolerated in healthy human subjects.

But what does tobacco have to do with it? Darpa doesn’t offer much info, but there’s a good chance the agency is interested in the speed that tobacco-based vaccine production offers. The burgeoning approach, which Darpa’s already been funding for flu vaccines, transfers carefully cultivated genes to bacteria, which then “infect” plant cells. The plants go on to produce the exact protein necessary to create the desired vaccine. It takes around five weeks, as opposed to the several months required using traditional methods.

That’s a novel  rationale for tobacco subsidies. It turns out that when Darpa’s not mulling liver enzymes, they’re trying to jump-start American job creation.

Read 4025 times
Published in News Technologique-Tech News
More in this category: « Microsoft's New Automatic Update Plan Could Mean the End of IE 6 Game Creation for Kids With Wario Ware DIY »
back to top