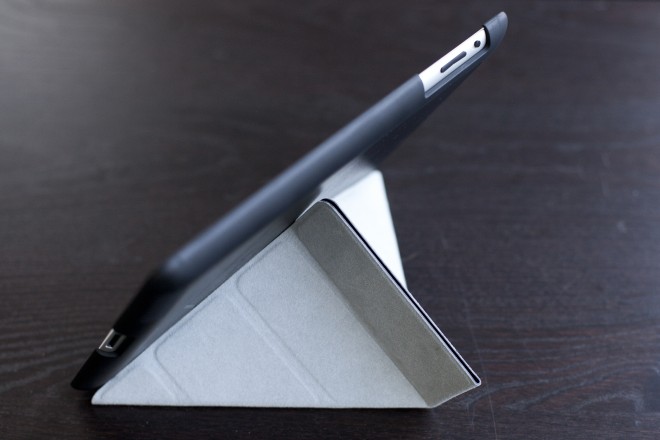 Were I to tell my most perpetually indignant friend that his tablet’s 3G radio is prone to regular performance drops of up to 75 percent, he would likely enter apoplectic rage.

Such is the emotional fabric of the modern tech enthusiast. We’re already concerned about overloaded data networks that can’t handle too many simultaneous user requests, and Apple’s iPhone 4 “antennagate” imbroglio, rightly or wrongly, has left conspiracy-minded consumers wary of self-sabotaging hardware.

But now a company called Pong Research is spreading word of a proximity sensor inside the iPad 2 Wi-Fi + 3G that reduces the tablet’s 3G radio output by some 6 dBm, or about three-quarters of its total transmission strength. The sensor is tripped whenever it comes within 10 mm of a solid object — which could be anything from human flesh to an iPad case that snugly ensconces the tablet’s chassis.

Apple doesn’t mention the proximity sensor in any of its marketing materials or user manuals, and it declined to comment for this article. But the sensor is referenced in Apple’s filings with the FCC, which make frequent reference to a 3G radio “back-off” mode.

So what is Pong’s stake in the game? The company specializes in third-party iPhone and iPad cases marketed as providing consumers with additional protection from the electromagnetic radiation emitted by their devices. As a side benefit, Pong’s iPad 3G case purportedly doesn’t trip the proximity sensor. Other third-party cases, Pong says, trip the sensor and leave the user with reduced 3G power.

To validate Pong’s claims, I visited Cetecom Inc., an FCC compliance lab, and observed while technicians tested the iPad 3G case under the full scrutiny of scientific inquiry. But before I reveal the test results, let’s dig a little deeper into the iPad’s proximity sensor. Why did Apple include a potential data governor in the 3G version of its tablet, and what effect does its back-off mode really have on real-world 3G data connections?

Down the FCC Rabbit Hole
Unless you burrow your way into a cryptic database of public FCC filings, it’s near impossible to find any evidence of an iPad proximity sensor. Indeed, simple Google searches only reveal speculation about the features a proximity sensor might provide were one to be deployed in Apple’s tablet. One thread of what-if-ing from January posits an auto-unlocking function that would be triggered as soon as a user picks up the device.

But evidence of the proximity sensor can indeed be found in a report prepared for Apple by Compliance Certifications Services (CCS), and submitted to the FCC on March 1, 2011. Titled “SAR Evaluation Report,” the document chronicles a series of tests to determine how much electromagnetic radiation a user might absorb from the iPad’s wireless communications hardware. SAR stands for “specific absorption rate,” and is the metric by which the FCC measures radiation exposure to the human body.

Deep inside the report, CCS makes note of the iPad’s proximity sensor in a section titled “Power Reduction By Sensing.” In summary, when the proximity sensor comes within 10 mm of a solid object, it triggers a “back-off” mode that reduces the power of the iPad’s 3G radio (which, along with the sensor itself, resides to the right of the front-facing camera in the iPad 2 Wi-Fi + 3G). CCS ran a series of tests to determine not only the degree of power reduction across various radio bands, but the effect of power reduction on SAR. 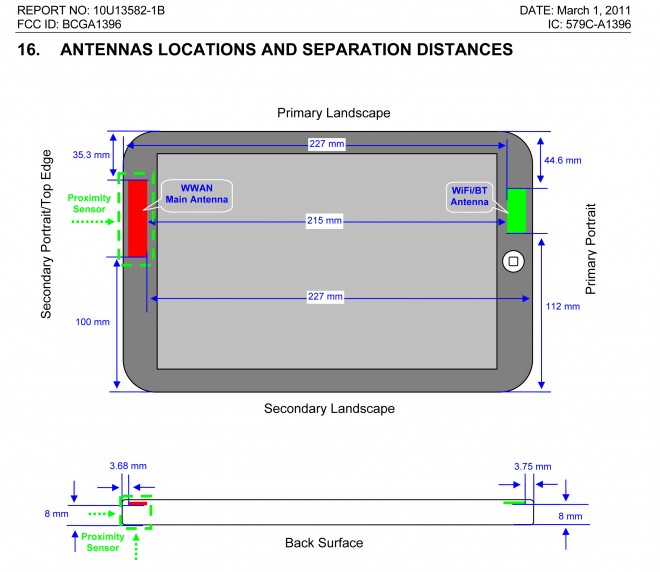 While Apple wouldn’t comment on the sensor, it’s easy to glean the sensor’s intent from both its cause-and-effect properties, and the fact it plays such a big part in a report on radiation absorption.

“It looks like the sensor is looking for human tissue next to the antenna, and if it sees it, it backs off the transmit power,” says Francis Sideco, iSuppli’s senior principal analyst for wireless communications. “You would assume that the FCC had some kind of requirements that the iPad had to meet.”

Like iSuppli’s senior wireless expert, even the teardown mavens at iFixit were unaware of the proximity sensor before I showed them FCC documentation. But in typically intrepid iFixit fashion, they got right down to business, and unearthed what they suspect could be the physical component itself. 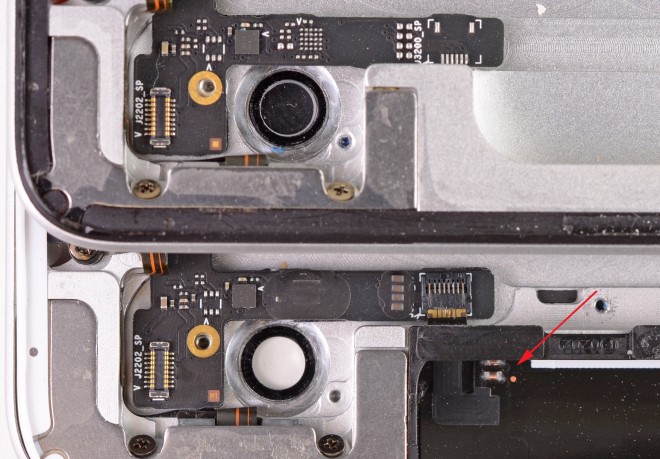 Thanks to iFixit, we have visual evidence of what might be the proximity sensor in question. The iPad on the top is Wi-Fi only. Below we see the 3G version of the same tablet.Miro Djuric/iFixit.com