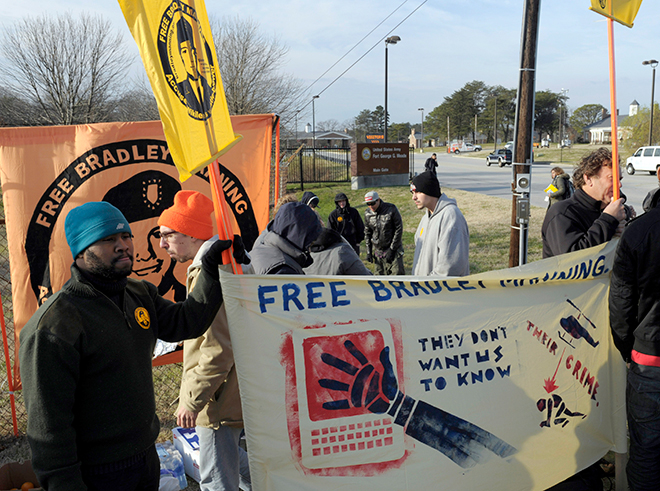 Protesters supporting Bradley Manning gathered outside Ft. Meade, Md., Friday, Dec. 16, 2011, where Manning is attending a hearing to determine if he will be court-martialed. (AP Photo/Susan Walsh)

FORT MEADE, Md. — The defense attorney for suspected WikiLeaks source Bradley Manning opened a pre-trial hearing on Friday morning with a bang — by calling for the investigating officer presiding over the hearing to recuse himself, immediately forcing the proceeding into recess while the government prepares a response and the officer reviews the details of the motion.

Defense attorney David E. Coombs called on Lt. Col. Paul Almanza, a reserve military judge who also works as a prosecutor for the Justice Department, to recuse himself on several grounds including bias and conflict of interest.

Almanza was appointed the investigating officer in August 2010, but has worked as a career prosecutor with the DoJ since 2002 until until Dec. 12 this year, when he went on reservist military leave to devote himself to the Manning case.

Coombs said that Almanza’s position with the Justice Department is a conflict of interest, given that the Justice Department has an open criminal investigation into wrongdoing conducted by WikiLeaks and has not ruled out the possibility that it could also jump in on the military case against Manning, Coombs raised concern that there could be pressure on Manning to plead guilty in the military case against him in exchange for providing information that could assist a criminal case against WikiLeaks founder Julian Assange or others related to the organization.

The IO was put on the defensive as Coombs also took issue with Almanza’s handling of witness requests from the defense and prosecution. Almanza has rejected 36 of 48 witnesses that the defense is seeking to testify at the hearing. Almanza had initially rejected 38 witnesses, but Coombs revealed in his motion statements on Friday that the court had decided that an additional two defense witnesses may be allowed. Coombs did not indicate which witnesses those might be.

Coombs noted that in filing its witness list, the government just provided a list of names, without providing grounds for why it was requesting the witnesses. All of the government’s witnesses were granted.

If Almanza does recuse himself, it could take weeks to appoint a new investigating officer.