I read somewhere online that the “high school cafeteria” scene in Spider-Man was real. Here is the scene:

The claim is that Tobey actually caught all that food on the tray, he just had to keep doing it until it worked.

But what does physics say about this?

Let me start with some analysis using Tracker Video Analysis. First, I found something that seems like that same food tray. This is important because I need something to scale the video. The tray above has a length of 18 inches. I suppose that is some sort of standard for the cafeteria industry.

So, here is what I get for the falling objects. Note that I don’t have much data for each one, just a couple of frames per object. Note: Left off the falling tray because it probably has a lot of air resistance. 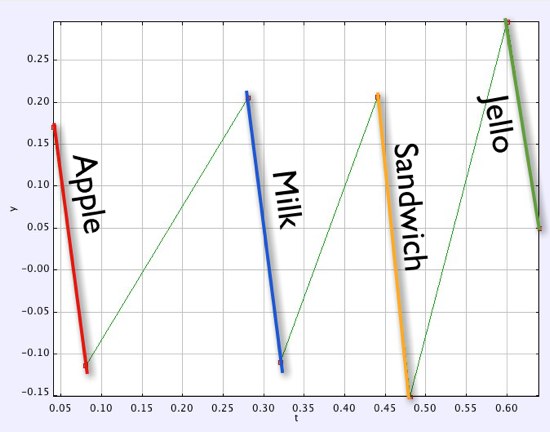 These are similar velocities, so I guess that is good. One thing I can look at: how high were these objects dropped from to have this final velocity? Let me calculate the height:

Here I assumed the objects were dropped with an initial velocity of 0 m/s. If I use a velocity of 6.5 m/s, I get a height of 2.2 meters. Ok, that seems like it would be an ok height. Also, if someone was dropping these objects, then this would be high enough to not show up in the shot.

If I know the final speed of the object, I can guess two things. I can estimate the time the object would be in the air and also the height of the thrown object. The key thing is to assume that the final and initial speeds are the same (v2 = -v1). Then I can write:

If I assume that all the food objects were launched at the same time but with different speeds, I can estimate their speeds. 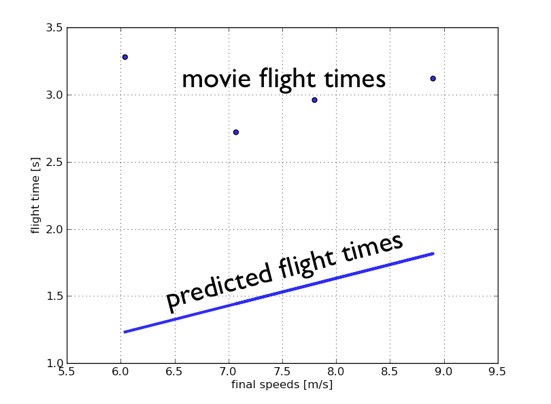 So, if those are the times of flight for the food they don’t correspond to the final velocities of the food.

Why do I have to beat around the bush? Can’t I just stop playing with physics and answer the following questions? Yes. Here are the questions and answers. Be sure to put these on flash cards because they will be on the test.

So, there you have it. That is the best I can do. One more note. There are some other cool physics questions in this same Spider-Man clip. Maybe there will be a second post.