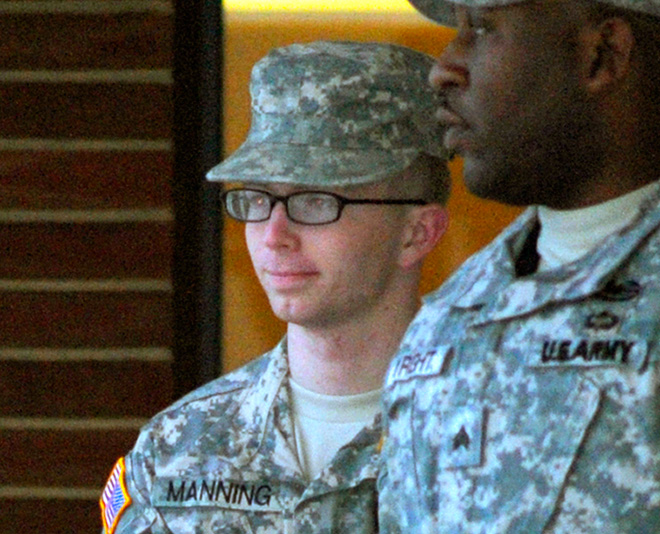 FT. MEADE, Maryland – One of Bradley Manning’s officers in Iraq testified Sunday that after WikiLeaks published the “Collateral Murder” video that Manning allegedly passed to the organization, he sent her links to the video to show her that it was the same one stored on the military’s classified network.

Capt. Casey Fulton, the government’s first witness on the third day of the hearing, testified that she had asked the analysts in her unit if they had seen the video and what they thought of it.

Manning later approached her in person and told her it was the same video that was on the Defense Department’s SIPRnet, a shared classified network that Manning’s brigade, and others, used for gathering data and conducting analysis.

Fulton said she told him, “No way, that’s not the same video. It’s definitely shorter in duration” from the military video. She told him she would have to view the two videos side-by-side to verify if they were the same.

Manning subsequently sent her an email with two links to two video clips – one to the video stored on SIPRnet, the other to the video published by WikiLeaks. The exchange shows how familiar Manning was with the video and highlights the extended interest he had in it, after WikiLeaks published it. Another witness testified on Saturday that after WikiLeaks published the video, Manning contacted his aunt, Debora Van Alstyne, asking how the public was reacting to publication of the video. Manning’s friend, Tyler Watkins, told Wired.com last year that Manning had also contacted him last year after the video was published, asking again how the public was reacting to the video.

In logged chats with former hacker Adrian Lamo, Manning was clear that the point of the leaking was to change people’s minds about the war and the U.S. government:

(02:24:58 AM) bradass87: the reaction to the video gave me immense hope… CNN’s iReport was overwhelmed… Twitter exploded…

(02:26:10 AM) bradass87: Washington Post sat on the video… David Finkel acquired a copy while embedded out here

(02:28:10 AM) bradass87: i want people to see the truth… regardless of who they are… because without information, you cannot make informed decisions as a public

During the course of the government’s direct examination of Fulton, prosecuting attorney Capt. Ashden Fein asked Fulton if, in the course of his work, Manning had a need to conduct searches on SIPRnet for certain keywords – “GITMO SOP,” “Julian Assange,” “WikiLeaks” — or whether he had reason to visit a specific part of the CENTCOM web site. Fulton replied “no” in all cases.

Another witness, fellow intelligence analyst Sgt. Chad Madaras, was later asked similar questions. Madaras and Manning shared computers at Forward Operating Base Hammer in Iraq, where they were deployed together. Madaras worked the day shift, and Manning mostly served on the night shift.

The government asked if Madaras had ever used their computers to search for some of the same terms, as well as the term “JTF GITMO” or the name “Birgitta Jonsdottr,” or if he had ever used the Net Centric Diplomacy Database. Madaras replied “no” in each case.

The implication of the questioning seemed to be that the government had found forensic evidence that Manning’s workstation computers had been used to search these terms, though there was no testimony that stated this directly.

Birgitta Jonsdottr is the name of an Icelandic politician who worked with WikiLeaks to edit the “Collateral Murder” video before the organization published it in April 2010. The Net Centric Diplomacy Database, is a database that stored 250,000 U.S. State Department cables that Manning is alleged to have downloaded and passed to WikiLeaks. CENTCOM is also significant, because Manning allegedly obtained an Army video from a CENTCOM web site and passed it to WikiLeaks.

Adkins’s testimony would have been significant to the defense’s case because he is the only soldier known to have been demoted as a result of an internal Defense Department investigation into the Army’s handling of Manning.

Adkins had been a master sergeant at FOB Hammer in Iraq and had been responsible for the security of the Sensitive Compartmented Information Facility (SCIF) where Manning worked on classified information. In testimony with other witnesses yesterday, it was revealed that Adkins had failed to pass information up the chain of command about behavioral problems that Manning had exhibited on a number of occasions – both before his deployment to Iraq and in the period around Dec. 2009, when he is alleged to have begun his major leaking activity.

A large part of the defense strategy is to show that had the Army responded to Manning’s behavioral problems correctly, he should never have been deployed to Iraq in the first place or should have had his security clearance revoked early on his deployment – both of which would have made it impossible for him to obtain the documents he allegedly leaked to WikiLeaks.

The other witness who invoked his right to silence, Warrant Officer 1 Kyle Balonek, was supervisor during the day shift at the SCIF. Manning had worked for a time on the day shift and sometimes worked on research products for Balonek.

Proceedings in the court this morning continued in a contentious manner between defense attorney Coombs and the Investigating Officer Capt. Paul Almanza. At one point, when the IO tried to stop his line of questioning with a witness, questioning the relevancy. Coombs abruptly walked to the defense table and grabbed a book containing Article 32 procedural rules and brandished it to Almanza.

“I would caution the investigating officr as to case law,” he said, adding that the defense should be given wide latitude in questioning to obtain discovery.

“The IO should not arbitrarily limit cross examination, ” he said. “I am not going off into the ozone layer about this. . . I should be allowed to ask questions about what this witness saw so I can have this testimony under oath as part of discovery.”