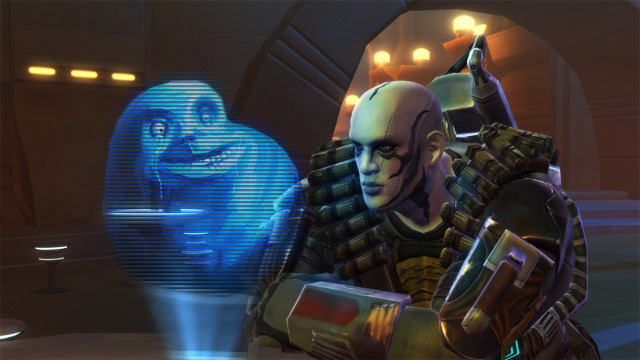 Forever alone? Even if you want to be a loner in Star Wars: The Old Republic, group gaming might prove hard to resist.
Image credits: Aurich Larson/Ars Technica; lysgaard/Deviant Art

A confession: I have little experience in the world of online role-playing games. I did not fall under the spell of World of Warcraft, nor did I ever play Star Wars Galaxies. These games have spawned their own vocabulary, rules and in some cases etiquette. I understand none of it. (Though I’m learning.)

It took the BioWare name and the Star Wars license to get me to install and play an MMO, and I have a feeling I won’t be the only one coming to Star Wars: The Old Republic as a newcomer to the genre when it is released Tuesday. During my pre-release access, I spent the first 12 character levels trying to do something radical: Play a massive multiplayer online role-playing game as if it were a single-player title. I simply don’t have enough extra time in each week to become an MMO fiend — but group gameplay turned out to be hard to resist.

This approach isn’t as crazy an idea as it sounds; BioWare has told me in the past that The Old Republic contains multiple sequels to its well-loved RPG Knights of the Old Republic, since each class contains its own story and characters. Those are what I wanted to get at — the story, the voice acting, and the fun of a BioWare RPG — rather than the work of joining a guild, gaining arcane knowledge about MMORPGs, and dealing with other people.

I had plenty of mental adjustments to make. I couldn’t pause the game for any reason, and progress gets saved to the server, meaning I couldn’t do something and then reload a save game to try something else. Players ran about everywhere, even though the game was still a week away from release. Listening to a character talk about a secret mission while surrounded by a large group of people also going after the same quest proved jarring.

Unlike Knights of the Old Republic, combat happens in real time and consists of clicking on an enemy, using a skill, and repeating the process until they’re dead. Forget stepping away from the action to plan your attacks in safety; once the bad guys pick a fight with you, it’s difficult to escape combat. Every now and again another player would jump into a fight where I was overwhelmed, although there was no advantage for them to do so. I learned how to make sure my character was always buffed with skills and stim-packs to give myself temporary boosts in stats, which helped. I also began to help other players once I gained a few levels. It was only fair.

Using the minimap to find each new quest was simple. While some of them did seem to be of the “fetch this for me” variety, I was pleasantly surprised that everything tied into my character’s story. (I had created a Sith Warrior and was trying to play him as a light side character to see how well that worked.) The structure of the quests feels rather stock, but talking to people resulted in interesting dialog and some surprisingly hard decisions.

One of my favorite quests allowed me to deal with three prisoners and decide the punishment appropriate for each one. Some characters agreed with my actions, while others did not. Some seemed baffled by my insistence on doing what I considered to be the “right” thing, and one Jedi even claimed that if things had been a little different, I might have found myself on their side. The story has a very slow burn, with few large events even though I’m around 15 hours in, but there was always a new character beat or satisfying moment to keep up my interest.

The early hours spent in combat were challenging, but only a few times did I find myself drowning. One character who seemed to be of the mini-boss variety beat me handily, so I left the area, killed a series of bad guys just to gain another level, bought some more healing items, and won on my second attempt. Soon I was given a companion in the game and was delighted to find that fighting alongside her meant I was much more capable on the battlefield. She could also go on missions without me to bring back loot, or even sell my useless items and bring me back some credits. An NPC to do my grunt work? I love it.

The game consists of large areas that swarm with other players, but once you select a mission and enter the green entryways that start quests, you’re in area where it’s just you and your party. Since I was trying to avoid the need to coordinate with other players, that meant the missions were performed just by me and my companion, which worked well. Even though I still couldn’t pause, it felt like I was playing a single-player game, complete with impressive dialog and character progression.

The game tells you when your actions will result in a move toward the light or dark side, though it’s not always clear which course of action is the best one. After I unlocked the skill tree, the game told me I could pay to adjust my skill points if I’d like — but that every time I did so, the price for changing my character’s build would go up. While the game is friendly, the stakes do seem higher than you’d find in an offline RPG.

Read 2324 times
Published in News Technologique-Tech News
More in this category: « The 9 Most Disappointing Games of 2011 Space Travel: The Interplanetary Tours Reservation Desk »
back to top