As the Drug War Goes Underground, Feds Call in the Robot 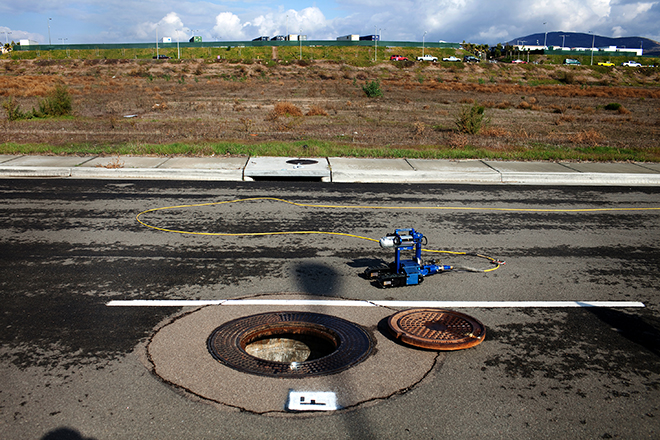 Suppose, for a minute, that you’re Joe Garcia, the deputy agent in charge of the San Diego office of Immigrations and Customs Enforcement. You’ve just got word that your Border Tunnel Task Force has found a drug smuggling tunnel that’s clearly coming from Mexico.

What you know about the tunnel: Somebody spent close to $1 million to build it -– tunnels usually turn up after neighbors have alerted police to truck traffic at unusual hours — signs that bales of marijuana are being loaded onto trucks and moved out of warehouses on the U.S. end. You know that it’s the work of a drug cartel –- these days mostly Sinaloa -– so you can assume dangerous people are involved.

What you don’t know: where the other end is, who’s in it, what they’ve left behind. Is it booby-trapped? Is it big enough for a person to walk through? Is the air quality lethal? Who’s on the other end and where?
In about 10 or 15 minutes, without putting an agent into a terrifying hole leading to unknown danger, the Tunnel Task Force team can deploy a custom robot to gather some of those answers. Using an 80-pound robot that combines air sampling equipment, lights, a camera mounted on a robot motoring on tank treads, which is itself tethered to a broad, yellow coated bundle of wires that reels out behind it. Agents can get the robot about 500 feet into a tunnel to start to figure out if it’s safe to send an agent in and what gear the agent is going to need.

“We always consider officer safety,” Garcia said. “Once we secure the warehouse, we utilize everything available to secure the tunnel.”

The tunnel task force, made up of agents from ICE, Customs and Border Protection and the Drug Enforcement Agency, started chronically finding tunnels under the border in a unique district over the past two years. They’ve found seven tunnels since 2006, Garcia says. In the past two years, they found four completed tunnels, ranging from 400 yards to about 600 yards long, as well as one incomplete tunnel.

“We’ve always operated on the premise that when we find one, there’s a high probability there’s another one well underway or already in use,” Garcia said. “Look, the last tunnel yielded 32.7 tons of narcotics [marijuana is classified as a narcotic under federal law] at at least $1 million per ton retail so if they used it once, they got back the money they invested.”

The tunnels all show up in a 3.5-mile stretch along the border near San Diego, and all but one were in a just under one-mile stretch bookmarked by the California Highway Patrol’s Otay Mesa Inspection Facility on the east end, and Otay Mesa Port of Entry Customs Inspection point at the west end.

They show up there for good reason. The area’s right on the border, and three of the tunnels came out of warehouses where the border fence — Mexico — so close that it’s literally at the south side of the warehouses’ parking lots. The area is almost exclusively industrial. And the area has a vacancy rate of more than 20 percent, according to Steve Rowland, a commercial real estate broker with Cassidy Turley. Many of the businesses on the strip are legitimate customs houses and transfer businesses, moving goods in and out on trucks every day — which provides good cover for people loading parcels onto a shipping truck.

The soil, a dense clay, makes tunneling feasible. The tunnels don’t need much shoring up during construction, which is done by day laborers using pneumatic spades -– they leave the tunnels with a smooth texture with rough edges as they dig.

Read 3028 times
Published in News Technologique-Tech News
More in this category: « Mystery Men Forge Servers For Giants of Internet Dec. 19, 1974: Build Your Own Computer at Home! »
back to top