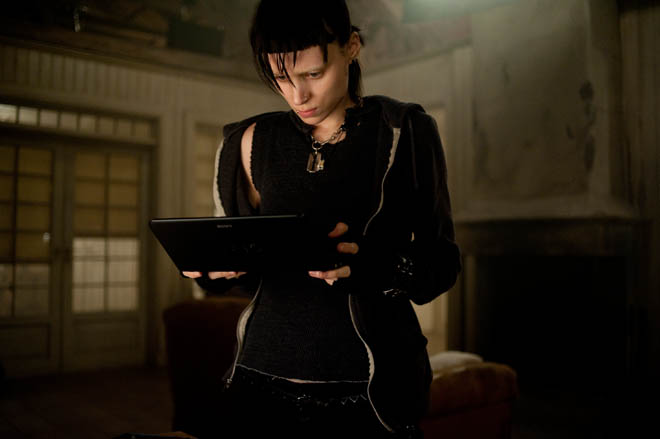 Rooney Mara stars as intense hacker Lisbeth Salander in The Girl With the Dragon Tattoo.

Perverse sex crimes form the visceral core of The Girl With the Dragon Tattoo, but those hideous acts only take up a few minutes of screen time. The real story engine for David Fincher’s unflinching two-hour, 27-minute thriller is fueled by information: Who controls it, who owns it, what’s private, what’s public, how is it hidden, when does memory fail and hard copy triumph?

Movies for the past decade have tried and largely failed to overcome the near-comical lack of drama involved in showing the hero tapping on a computer keyboard. Fincher’s R-rated adaptation of the Stieg Larsson novel manages the rare trick of rendering digital sleuthing into a cinematic adventure.

How did Fincher keep things moving? For starters, he picked the right Lisbeth. Mara spent two months auditioning, then shaved her eyebrows and got multiple piercings to get into character as the chain-smoking, junk-food-eating, sexually aggressive, feminist hacker. Subsumed in the character, she displays the scrawny build of a 23-year-old punk rocker and the flat affect of a woman who trusts no one. 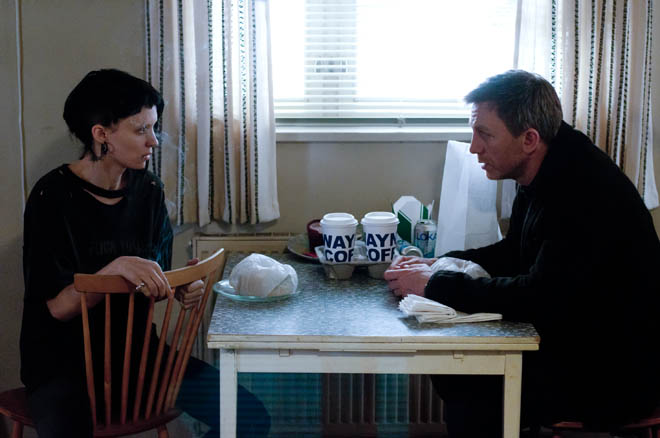 Portrayed by Noomi Rapace in the excellent 2009 Swedish-language Dragon Tattoo movie, Lisbeth Salander resonates as an uncompromising original who embodies a 21st-century truism: Those who master information can master the world.

Despite its dense exposition, The Girl With the Dragon Tattoo, which opens Tuesday, also sustains interest thanks to the score by Oscar-winning composers Trent Reznor and Atticus Ross (The Social Network).

To transform otherwise static data-collecting scenes into tension-filled scenarios, Ross and the former Nine Inch Nails front man prove masters of the foreboding pulse from hell. In place of melody-dominated orchestrations, they hammer metronomic bass notes laced with delicate chimes and bell tones. The music telegraphs, through a thrilling alchemy with the moving image, an unmistakable sense that something horrible is about to happen.

The Girl With the Dragon Tattoo creator Larsson, himself an investigative reporter who died under mysterious circumstances in 2004, addressed big digital-age themes on paper. Fincher, screenplay writer Steven Zaillian and company deserve credit for figuring out how to make data drama work as a movie.

TIRED Bring a scorecard to keep track of the names.

Read 4716 times
Published in News Technologique-Tech News
More in this category: « In WikiLeaks Case, Bradley Manning Faces the Hacker Who Turned Him In Check an E-Book Out From the Library »
back to top