BioWare: Next Dragon Age Will Draw From Skyrim 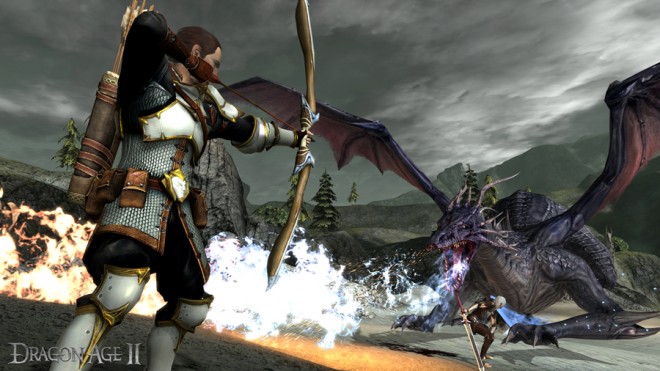 NEW YORK — The next entry in the fantasy role-playing Dragon Age series will draw inspiration from both of its predecessors as well as open-world games like The Elder Scrolls V: Skyrim, developer BioWare said.

Speaking to Wired.com in Manhattan on Tuesday afternoon, BioWare CEO and co-founder Dr. Ray Muzyka said the company has been listening to its fans and learning from the strengths and weaknesses of both Dragon Age II, the latest entry in the popular series, and other games that are on the market today.

“[The next Dragon Age] is gonna have the best of features from the prior Dragon Age games, but it’s also gonna have a lot of things I think players are gonna find compelling from some of the games that are out now that are doing really well with more of an open world feel,” Muzyka said.

“We’re checking [Skyrim] out aggressively. We like it. We’re big admirers of [Bethesda] and the product,” he said. “We think we can do some wonderful things.”

Dragon Age II, which BioWare released earlier this year for PC, Xbox 360 and PlayStation 3, drew polarized reactions from both critics and fans. While some lauded its character development and writing, others, including Wired.com, criticized the game for feeling rushed and disjointed.

Muzyka acknowledged that polarization, saying that although he is proud of the Dragon Age II team and the innovations it brought to the table, he is listening closely to fan reactions for the next game in the series.

“How do we combine the new innovations we brought in Dragon Age II with the experience people were looking for in Dragon Age: Origins?” Muzyka said.

The story of Dragon Age II took place across a decade-long span in the city of Kirkwall, allowing players to see how the city and characters evolved over the years. Muzyka hinted that the next Dragon Age game could take that narrative structure and apply it to a variety of areas, rather than a single city.

Muzyka also addressed the common criticism that players could not equip their party members in Dragon Age II, saying BioWare took that feedback to heart.

“We realize that’s important to the players,” he said.

Though BioWare has not yet officially announced the next Dragon Age game, rumors have been swirling about a possible multiplayer mode that could feature playable dragons.

“Our goal is to surprise and delight our fans,” Muzyka said. “I’ve seen something in the last couple of weeks that is really the future of that franchise that is so compelling, I am so looking forward to being able to announce it.”

Muzyka would not elaborate on this tease, though BioWare VP and co-founder Greg Zeschuk chimed in with a joking suggestion of his own.

“The most realistic beards ever in videogames,” Zeschuk said.