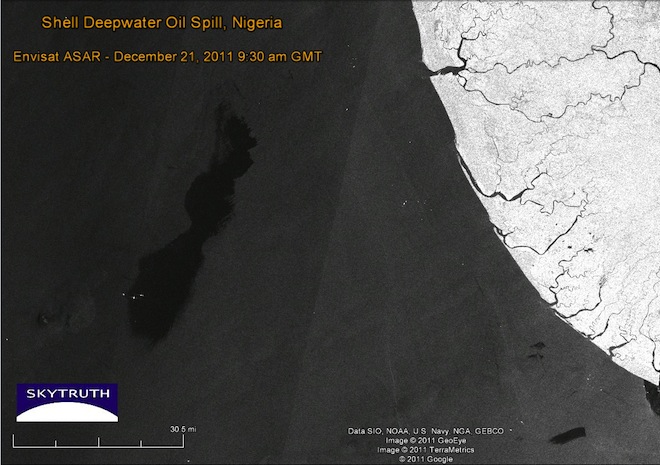 By Deepwater Horizon mega-disaster benchmarks, it’s not so big — but it might be in the Exxon Valdez ballpark, and underscores the risks of a new deepwater oil-gathering technique that’s coming soon to the Gulf of Mexico.

The spill occurred Dec. 20 at Shell’s Bonga deepwater facility, prompting an immediate temporary closure of the oil field. Shell estimated that up to 40,000 barrels of oil — about 7 million gallons, compared to 11 million gallons for the Exxon Valdez — leaked.

Unlike the Deepwater Horizon disaster, which involved the blowout of a wellhead 5,000 feet deep, the Bonga spill occurred at the surface during transfer of crude oil between ships. It was relatively easy to fix, which at first glance might seem reassuring.

“It is important to stress that this was not a well control incident of any sort,” said Shell Nigeria chairman Mutiu Sunmonu in a statement. But Amos says the spill is still troubling.

Oil in the Bonga deepwater field is collected by a method known as floating production storage and offloading, or FPSO, in which crude oil is piped to floating, mobile tanks, usually converted supertankers, rather than fixed platforms. Shuttle tankers collect oil from the FPSO and carry it to market.

Introduced 30 years ago for shallow-water drilling, FPSO is now hugely popular in the oil industry. It’s far less expensive and technologically demanding than building platforms, and in recent years was customized for deepwater operations, with first-generation facilities constructed off Africa, Asia and Latin America.

In March of this year, the U.S. Bureau of Ocean Energy Management, Regulation, and Enforcement — formed after the Deepwater Horizon disaster to replace the corrupt Minerals Management Service, but still criticized for rubber-stamping proposed drilling projects — approved the first U.S. deepwater FPSO.

Located in the Gulf of Mexico and run by the Brazilian company Petrobras, its construction was halted by an accident. But given their economic appeal and a lax approval process, more U.S. FPSOs are imminent, said Amos.

“The Petrobras FPSO is a vessel that can hold 600,000 barrels of oil. When it’s full, it will be holding 25 million gallons. If there’s any serious problem that occurs 160 miles offshore — if you get damage from a major storm because you didn’t get out of the way in time, if there’s a terrorist attack, if there’s an explosion, then you’ve potentially got a near-instantaneous release of tens of millions of gallons of oil,” he said.

“How does 170 million gallons spilled from a runaway deepwater well over a 10 to 12 week period stack up with an instantaneous spill that’s one-third the size? I’m not sure what’s worse,” Amos continued.

Problems during transfer between tankers, as seen in the Bonga spill, can also occur, and risk will be multiplied by the number of FPSOs. “There will be a proliferation in the Gulf of Mexico,” said Amos. “We’re ushering in an entirely new kind of development technology with what appears to be very little public scrutiny. This is a brand-new development approach that’s coming to U.S. waters, and we need to do a better job understanding the risks.”

Read 4213 times
Published in News Technologique-Tech News
More in this category: « 2011 is the Year of the Hacktivist, Verizon Report Suggests Can a Picture Of Your Mother Diagnose Depression? »
back to top