When you finally press the launch button and hope to see your rocket fly you know that every single piece of hardware must perform as intended or you might end up with a complete mission failure. Everything added to the space rocket has a purpose. If not, it should not be there.

Naturally, some systems are more tolerant to failure (or near failure) but others must perform perfectly if you want to experience the next step of the flight as well. The launch vehicle has to perform as intended otherwise you do not reach the destination you hoped for. The separation system between space capsule and launch vehicle as well. I can name hundred of such systems, but I won’t or you will fall asleep.

Most systems being developed for this mission can be tested completely (or close to) on ground. The engines can be tested on ground thoroughly bolted to the ground as well as basic radio communication and deployment of up-righting bag just to mention a few.

However, systems which must perform in special aerodynamic environments are not easily tested. We do not own a wind tunnel or capable of creating the changes in atmosphere and wind speed which is required. These systems will normally be tested for the first time during actual flight adding much intense excitement to our expectations of the outcome.

Parachutes are such a system and subject for this blog post.

As described earlier in several posts we hit a wall when trying to buy our way out of the main parachutes development. So, we are doing them ourselves with Søren Gregersen in charge.

Parachutes are the critical last part of a mission which must deliver correct aero-braking insuring survival of both the space capsule and crew during splash down. Parachutes do no care about the mass they hold when being deployed but they do care (very much) about the wind speed and atmospheric density.

Aero-braking using parachutes is typically divided into more than one session. It is quite impossible to make use directly of large parachutes, even during a suborbital descent, because your velocity is likely to be much too high for the parachutes and they will burst. So, before deploying your main parachutes you need to perform an initial aero-braking using a drogue which is a smaller and much more powerful parachute capable of enduring high speeds.

The image below shows our current deployment configuration (right) compared to the configuration used during the Apollo Program. NASA was forced to use an even more complex division of the parachute sequence to comply with the extreme descent rate when falling from the Moon or LEO.

To determine at which altitude and speed the different parachutes should be deployed I make a general use of the terminal-velocity formula which can give you a current velocity of an object based on the mass of the falling object (m), acceleration due to gravity (g), drag coefficient (Cd), density of the air based on altitude (?) and projected area of the object (A).

Instead of manually picking out the density of the air based on altitude I have replaced density (?) with this little formula ? = 1.21 * EXP (-altitude/8000), I found somewhere on the Internet which seems to work just fine.

But remember that the terminal velocity formula only gives you a hint about the speed of your falling object but it’s not the whole truth since you need to take into account the time it will actually take to perform the aero-braking either by atmospheric drag or parachutes.

Also, I go by some basic rules that our drogue can only handle deployment and operation speeds at maximum 500 km/h (310 mph) and our main parachutes 150 km/h (app 95 mph) in a high dense atmosphere meaning that you can increase these numbers if you operate them in higher altitude and thinner air density. But then you may have troubles with the actual deployment. These assumptions are made from much research but again it is only hints and you will only find out this is correct after a real live, full-scale test.

But one thing is theory and formulas.
Another thing is creating the parachutes and practical experience.

I decided quickly to buy the high power drogue in the U.S. which is a product normally used for drag-racing. They can perform within the required speeds and have enough drag-area for the aero-braking needed before deploying the main parachutes. You can see the product here.

The main parachutes were quickly chosen by Søren to be a cross-parachute by design. It is basically a simple cross made from either five squares or one long center lane and two side squares. The simple design give us maximum use of the fabric you have to purchase compares to mores complex round shaped parachutes where you have unique formed lanes of fabric.

The cross parachute is generally used for both cargo drop but also for manned missions in a slightly different configuration where each open corner of the four arms are sewn together. This is done to create a more spherical dome during descent providing a more effective drag area.

The image below shows one of the three main cross parachutes made for spacecraft Tycho Brahe, which was launched in June made from “standard” nylon parachute fabric. These parachutes were deployed at four times the speed of what they can handle which led to failed deployment. But we still believe the design in viable and we observed destruction in the fabric and not in the sewing seams. 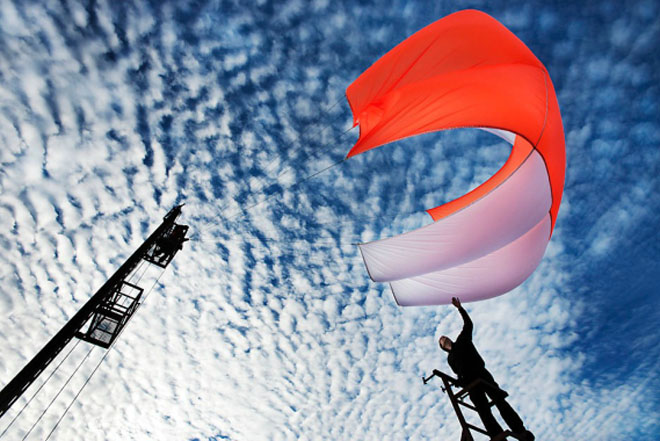 The next generation of the cross parachutes will have the four “arms” sewn together and a better aspect ratio of the arms and the center square based on research found on the Internet providing increased total drag area. 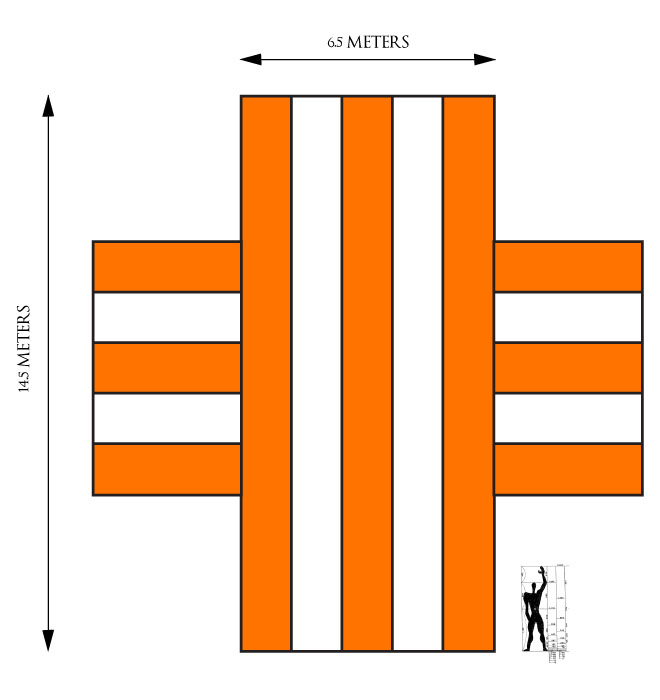 The total size of the new three main parachutes for space capsule Tycho Deep Space was determined by a splash down descent rate of 10 m/s. Based on the mass of the space capsule (500 kg) a total drag area of 120 square meters seems to be needed. You are welcome to do some of the math yourself and let me know if you find any major miscalculations. Here is the xls-calculation sheet for the parachutes for download.

The first batch of fabric has been ordered and Søren will begin production on the other side of Xmas in his living room using his oldschool industrial sewing machine. Good luck Søren!

I will leave further details on how, where and when we plan to test these coming parachutes and how to deploy them technically, in futures blog posts.

Have a great day….

Read 8182 times
Published in News Technologique-Tech News
More in this category: « #40dollars and No Mule: The White House and Social Media Strike Back Vanessa Carlton: A Google-a-Day Puzzle for Dec. 22 »
back to top