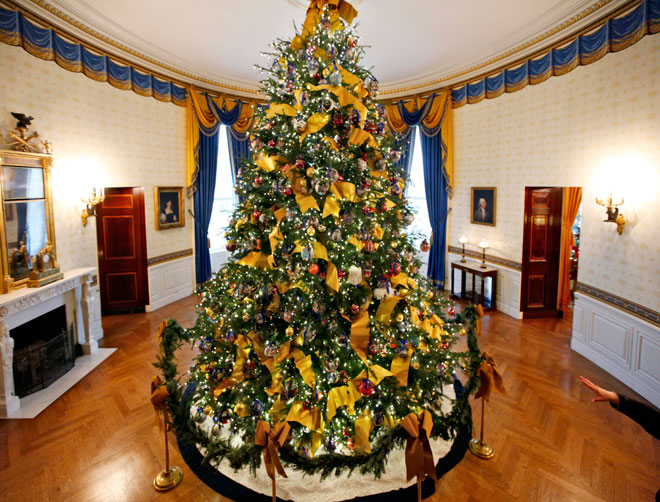 1882: An inventive New Yorker finds a brilliant application for electric lights and becomes the first person to use them as Christmas tree decorations.

Edward H. Johnson, who toiled for Thomas Edison’s Illumination Company and later became a company vice president, used 80 small red, white and blue electric bulbs, strung together along a single power cord, to light the Christmas tree in his New York home. Some sources credit Edison himself with being the first to use electric lights as Christmas decorations, when he strung them around his laboratory in 1880.

Sticking them on the tree was Johnson’s idea, though. It was a mere three years after Edison had demonstrated that light bulbs were practical at all.

The idea of replacing the Christmas tree’s traditional wax candles — which had been around since the mid-17th century — with electric lights didn’t, umm, catch fire right away. Although the stringed lights enjoyed a vogue with the wealthy and were being mass-produced as early as 1890, they didn’t become popular in humbler homes until a couple of decades into the 20th century.

A general distrust of using electricity for indoor lighting, still widespread in the late 19th century, kept the popularity of Christmas lights low. They were most commonly seen ringing the seasonal display windows of big-city department stores.

In 1895, President Grover Cleveland (a New York stater himself) supposedly ordered the family’s White House tree festooned with multicolored electric lights. If he did, it barely moved the needle on the popularity scale. Even so, General Electric began selling Christmas-light kits in 1903.

Another New Yorker is generally credited with popularizing indoor electric Christmas lights. According to the story, Albert Sadacca, whose family sold ornamental novelties, became a believer in 1917 after reading the account of a bad fire caused by a candlelit tree bursting into flames.

Whether or not that’s the reason, Sadacca began selling colored Christmas lights through the family business. By then, the public’s distrust of electricity had diminished. So the timing was right, and sales took off.

With his brothers, Sadacca later started a company devoted solely to the manufacture of electric Christmas lights. He succeeded in roping a few competitors into a trade association, which proceeded to dominate the Christmas-light industry into the 1960s.