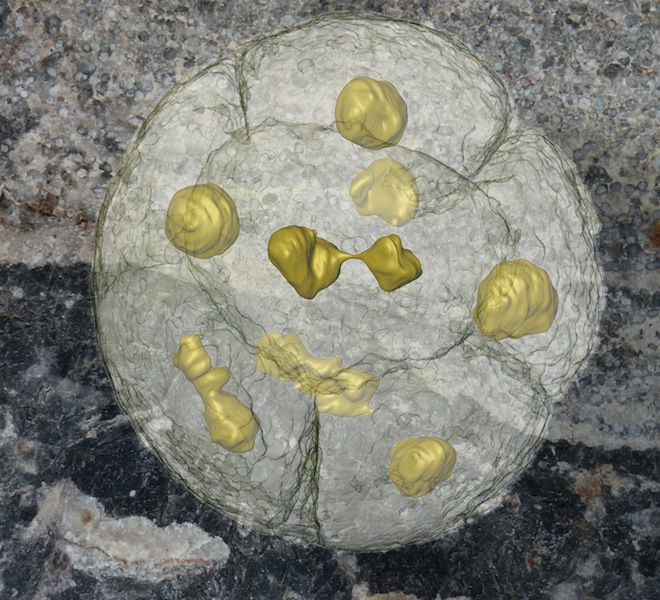 New research suggests that fossils thought to represent some of the earliest multicellular life are instead single-celled, amoeba-like organisms. But even if they’re not quite full-blown animals, they may hint at how animals came into being.

The 570-million-year-old Doushanto formation, first unearthed in South China in 1998, contains tiny clusters of cells that look similar to animal embryos. During the embryo stage of life, cells become organized into tissues and organs, one of the hallmarks of all animal species.

Using a technique called x-ray tomographic microscopy, researchers captured an unprecedented level of detail in the Doushanto fossils, imaging internal and external features down to a ten-thousandth of an inch. They could even see individual nuclei within the cells, some of which were caught in the act of dividing.

Interestingly, these nuclei had distinctive shapes, quite unlike the cell nuclei of animal embryos, which lose their contours when they divide. Furthermore, while the cells were rapidly dividing, they weren’t differentiating into specialized tissues. The cell clusters also sprouted peanut-shaped protrusions filled with spore-like cells.

“All of that is completely incompatible with an animal-embryo hypothesis,” said paleontologist Philip Donoghue from the University of Bristol in the U.K., a co-author on the new work, which appears Dec. 22 in Science. 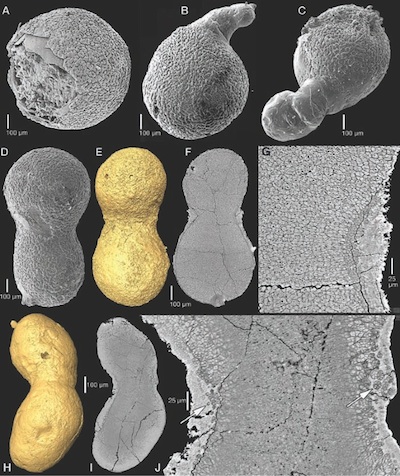 When it was originally proposed, the animal-embryo hypothesis “was met with almost palpable relief” wrote Cambridge University paleobiologist Nicholas Butterfield in an accompanying commentary. The Doushanto formation sat at the base of a 40-million-year-long time period known as the Phanerozoic, which came just before the Cambrian — a time known colloquially as the Cambrian explosion, during which many new phyla of animals appear suddenly in the fossil record.

According to the theory of gradualistic evolution, which holds that life evolves slowly and steadily rather than in punctuated bursts, “the pre- Phanerozoic oceans must have swarmed with living animals — despite their conspicuous absence from the early fossil record,” wrote Butterfield. If the Doushanto fossils really were animals, “it was indeed the fossil record that had let us down, not the textbooks, and certainly not the exciting new insights from molecular clocks.”

But the new findings “look set to revoke the status of these most celebrated” fossils, Butterfield wrote.

Instead of resembling animals, the pattern is more consistent with a class of single-celled organisms known as Mesomycetozoea. These creatures, which exist in an amoeba-like adult stage, reproduce by dividing into hundreds of new cells that remain in a tightly packed mass until being released as tiny spore bodies.

While the finding is a blow to those who consider the Doushanto fossils early animal embryos, they may shed light on how cells first became organized into multicellular groups, said Donoghue. The Cambrian explosion could have been primed by the sophisticated behavior seen in these fossils, with permanently multicellular arrangements following naturally from temporary communality.

This is, to be sure, speculative, but compelling enough for Butterfield to herald “the arrival of this revolutionary new clade.”

The research is “a great step forward” in understanding early single and multicellular life, said paleontologist David Bottjer of the University of Southern California, who was not involved in the new work. But he cautioned that researchers are still at the beginning of the game regarding these fossils and new evidence could change the story once again.

Read 4298 times
Published in News Technologique-Tech News
More in this category: « Unknown Sixth Toe Discovered in Elephants The Car of Tomorrow Recognizes Your Butt »
back to top