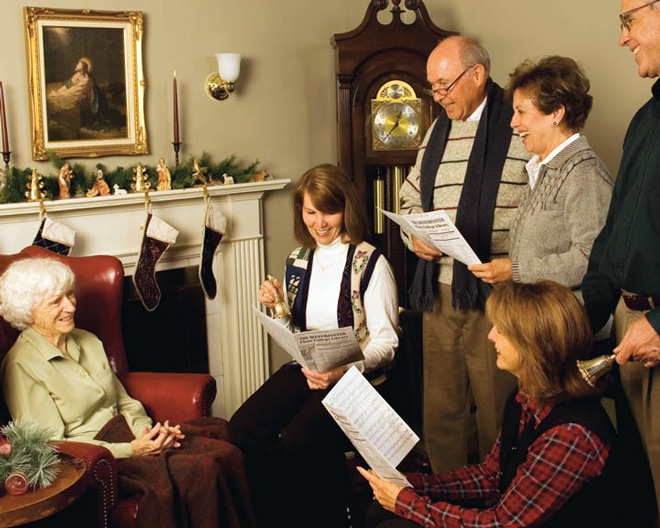 I suggested a number of overhauls to make Christmas more efficient and somewhat more bearable in last week’s column. This time I’m tackling the No. 1 reason so many people poke their eardrums out with straightened paper clips in December: Christmas music.

I’m not going to suggest we stop blaring Christmas tunes in every commercial district in the United States, because that would mean that Bing Crosby’s heirs might have to use their 1,800-thread-count Egyptian cotton sheets more than twice before incinerating them.

But, as xkcd’s inimitable Randall Munroe recently pointed out, the songs currently on high holiday rotation are a bit over-focused. At the same time, new yuleish songs may not be the answer; I don’t want to hear Lady Gaga singing “hit me with your Christmas stick” any more than you do.

The solution, I think, is to expand the canon. Let’s take familiar songs and formally declare them to be Christmas songs. They did it with “My Favorite Things,” presumably because the song’s lyrics mention sleigh bells and mittens, and in spite of the fact that they mention roses and dog bites.

Clearly, any song can be a Christmas song if you wish hard enough and wear a god-awful red-and-green sweater. So let’s unveil the new musical additions to the Christmas bullpen.

Song: “Enter Sandman”
Artist: Metallica
Why: Because “Sandman” sounds kind of like “Santa,” the song is sort of like “The Night Before Christmas” with a screaming guitar solo, and it contains the word “snow.”

Song: “Hazy Shade of Winter”
Artist: The Bangles. (OK, Simon & Garfunkel too.)
Why: Winter, doy-hey. Also there’s a patch of snow on the ground, which is kind of Christmasy. And the lyrics are so vague you can pretend they’re about angels or something.

Song: “Crucify”
Artist: Tori Amos
Why: Putting the Christ back in Christmas. And who doesn’t want to wake up Christmas morning to find a savior beneath these dirty sheets?

Song: “Informer”
Artist: Snow
Why: Well, Snow, obviously. And the general theme of someone knowing whether you’ve been bad or good. And the holidays need at least one song that mentions a police-station cavity search.

Song: “Let’s Get It On”
Artist: Marvin Gaye
Why: For some odd reason, Gaye never revealed what “it” is. Music scholars have suggested everything from a hand-woven, two-person serape to a reform of the electoral college. It seems to me that we can just declare that Marvin wants to get Christmas on! He wants you to stop beating around the bush and give yourself to him right this minute so that you can both enjoy eggnog and gingersnaps.

Song: “Hey Ya!”
Artist: OutKast
Why: This is obviously a Christmas song. It talks about winter weather (“What’s cooler being cool? Ice cold!”), it talks about warm goodwill toward others (“Lend me some sugar, I am your neighbor”), it talks about family (“Thank God for Mom and Dad for sticking two together”) and the importance of precious holiday memories (“Shake it like a Polaroid picture”). And it’s not like “Hey Ya” has been so overplayed that even deaf people are damn sick of it.

Song: “Rio”
Artist: Duran Duran
Why: Because it mentions, uh, cherry ice cream? Which is white and red? Like Santa? And it mentions, um, stars? OK, fine, I just like the orgasm noises.

Born helpless, naked and unable to care for himself, Lore Sjöberg overcame these handicaps to become a basso profundo, a cappo di tutti cappi and a frutti di mare.