The robots are part of an award-winning system developed at the University of California, Santa Cruz that fuses fast-paced automatic screening techniques and neon bacteria with undersea hunts for new disease-fighting bugs.

“The cool thing is we can find entirely new bacteria with novel compounds that no one has ever seen before,” said microbiology graduate student Nicholas Shikuma.

Biofilms are sturdy sheets of bacterial scum that shelter bacteria from antibiotics and wrap prosthetic implants in slimy disease-harboring membranes. In cholera, still rampant in developing countries, they coat intestines with clumps that repel antibiotics.

“Bacteria in biofilms are 10- to 1,000-fold more antibiotic-resistant than free-floating forms,” said chemistry graduate student Kelly Peach. “If you could knock down the biofilm state, then your immune system could come in and clear the infection.” 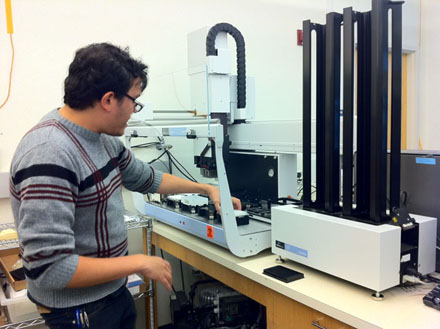 But traditional methods for finding biofilm inhibitors are time-consuming and labor-intensive. So the students, along with UCSC chemist Walter Bray, devised a technique that uses a mutant strain of cholera to pump out massive amounts of what Peach calls “biofilm goo.”

Then, a roomful of robots injects the goo with hundreds of different chemical compounds, shines a laser through the mixture to measure growth, and takes a picture of the fluorescent brew. Glowing green gobs means a chemical didn’t dissolve the biofilm; sparse speckles means it did.

“It’s a very, very clever screen,” said microbiologist Matthew Parsek of the University of Washington. “People used to stain biofilms with purple dye to measure growth. What they are doing at UC Santa Cruz is much more sophisticated.”

The scientists then screen compounds that come from “bacterial sludge” Peach and her labmates collect on scuba-diving expeditions to Panama and the west coast of the U.S. Some microbe-hunting divers travel to exotic locations to capture different bacteria, but most of Peach’s interesting finds have come from California and Oregon.

“It’s just not a very nice place to go scuba diving,” Peach said. “You have to hold on to your buddy because you can’t see underwater.”

With sludge-screening robots on its side, the UCSC team can sift through up to 1,000 compounds a day. The compounds they’ve discovered will need to be tested extensively in the lab and then in clinical trials before they can be used as drugs, so the team is collecting as many biofilm disrupters as they can. Their hope is that one of the compounds they find will eventually be used in conjunction with antibiotics to treat cholera, or other diseases. 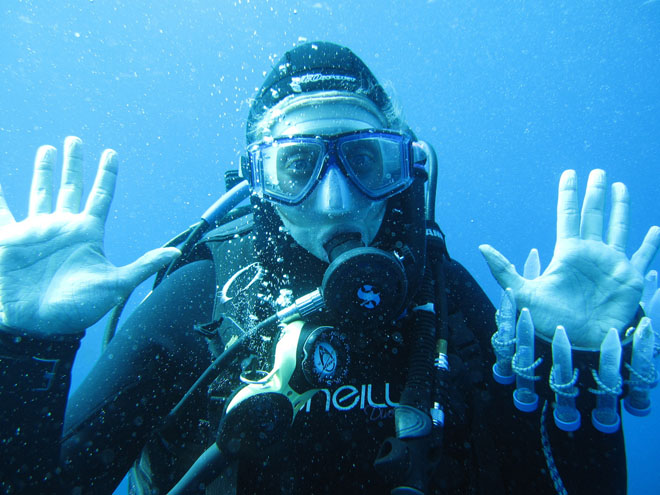 Read 6603 times
Published in News Technologique-Tech News
More in this category: « Filter: Robotic Pets Neither Poop nor Need Walks Tom Arnold: A Google-a-Day Puzzle for Dec. 26 »
back to top