Does a Magnet Gun Conserve Momentum?

The Gauss gun. A very simple, yet very cool device. Check out this video.

There are many other examples of this Gauss gun. You can easily reproduce this yourself. You just need some magnets and steel balls (or balls of steel).

This seems to be someway to cheat, doesn’t it? If you replaced the magnets and the magnetic interactions with springs, would the same thing happen? No. Then what is going on here? Why does the final ball leave faster than the initially moving ball? In terms of energy, clearly kinetic energy is not conserved. However, the total energy should be conserved.

In terms of work-energy, I can think of the balls and the magnets as closed system. This means there is no work done and the energy equation can be written as:

Since the final ball speed is greater than the initial, the change in kinetic energy is a positive value. This means that the change in magnetic potential would have to be negative. Just what the heck is magnetic potential energy? Well, think of it this way. One ball on one side of the magnet plus 3 on the other takes less work to create than 4 on one side and none on the other. That is about the best I can say without getting too complicated.

Although the kinetic energy is not conserved, the momentum should be conserved. Why? It has to do with forces and time. Here is a diagram of the same balls before the collision.

Same force (magnitude) and same time means the other stuff will have the same change in momentum (magnitude). This is conservation of momentum. It is a consequence of forces interacting in a closed system.

Here I reproduced the Gauss gun, but at a better viewing angle.

Using Tracker video analysis, I get this plot of the position of the first moving ball. 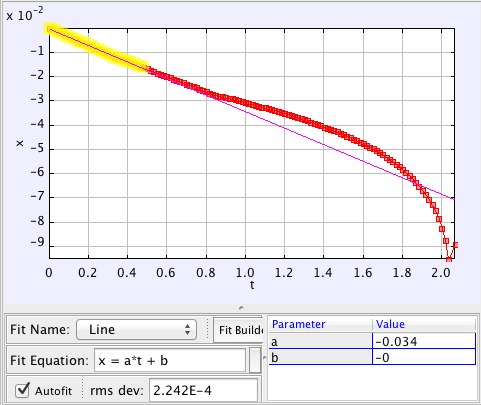 Notice that I gave it a little push so that it started with a horizontal velocity of about 0.034 m/s. But before it collided, it slowed down before it sped up. It had a minimum horizontal speed of 0.025 m/s and right before it collided, it had a speed of about 0.29 m/s. I suspect the ball slowed down a bit because of the frictional force. For momentum purposes, I will assume the speed of the ball before it started interacting was 0.025 m/s. And if the ball had a mass of 67 grams, this would make the total initial x-momentum – 0.00168 kg*m/s. 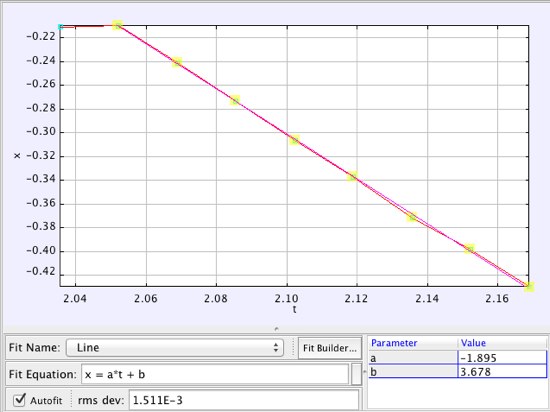 It has a x-velocity of -1.895 m/s to give it an x-momentum of -.127 kg*m/s. The motion of the magnet is a little trickier. Why? Because there is some clear friction there. Here is the motion of the recoil stuff. 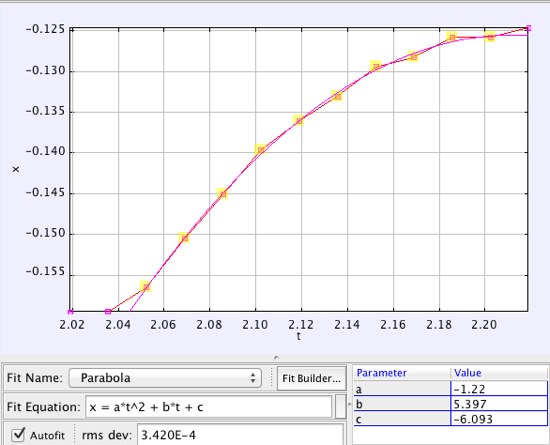 It looks like it has a constant acceleration – which makes sense. If there is a constant frictional force, there would be a constant acceleration. However, I don’t really care about the friction. I care about “initial” x-velocity. Here, “initial” means the x-velocity RIGHT after the collision. So, the quadratic fit to that data gives me the position as a function of time. The x-velocity as a function of time is the derivative (with respect to time) of the position function. This means I have the following for position and velocity.

WARNING. The a above is NOT the acceleration. It is the fit parameter, that is all. I used the same letters as from Tracker. Tracker gives these parameters (a,b,c) from the fit. To find the initial velocity, I just need to know a, b and the time. Looking at the graph, it looks like the collision happened around time t = 2.052 seconds. Using this time, I get an x-velocity of 0.39 m/s. The objects moving are 3 balls and one magnet. The magnet has a mass of 73.3 grams. This gives the recoiling objects a momentum of 0.107 kg*m/s.

Bonus Points: See if you can figure out the coefficient of kinetic friction between the magnet-balls and the track.