Why Windows 8 Tablets Will Surprise Everyone 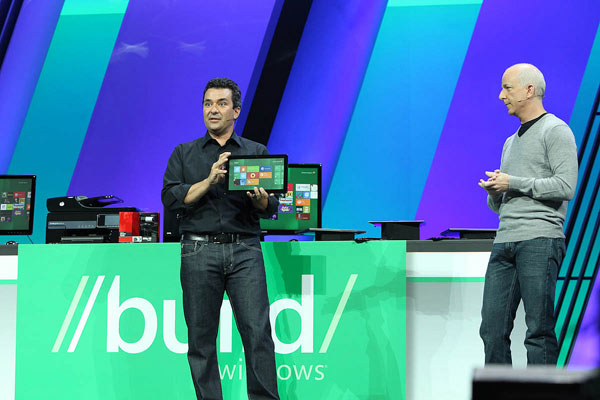 Windows-based tablets haven’t been treated kindly by the test of time. Those released in the Windows XP era relied on wonky, stylus-based data entry, and even modern, touch-based tablets running Windows 7 are poor performers.

Indeed, Microsoft has a troubled tablet history that the public isn’t soon to forget. This November, Forrester released a study that showed consumer interest in a Windows-based tablet dropped significantly this year. At the start of 2011, 46 percent of potential tablet owners wanted a Windows device. By Q3, that number slipped to 25 percent.

That’s a shame because Gadget Lab has seen a Windows 8 tablet in action, and the experience opened our eyes to just how useful — and, yes, even fun — a Windows 8 tablet might be. Sure, Microsoft was demoing a mere reference design, but what we saw was so intriguing, we’re legitimately excited to see final, shipping products.

Windows 8 is being developed from the ground up to elegantly run on both traditional computers (desktops and notebooks) as well as touch-based tablets. The OS can run on either ARM or x86 processors, though apps written specifically for the x86 desktop environment won’t be able to run on ARM-based mobile devices.

Is this a terrible handicap? No, not based on what we’ve seen. Windows 8 tablets will run an updated version of the Metro UI found on Windows Phones, and the UI appears to transfer remarkably well to larger touch screens. You’ll get that same fun, friendly and animated “Live Tile” home screen found on Windows Phones, but with (theoretically) much more processing power to drive more powerful apps.

Windows 8 will go beta in February, which would peg a full software release around June 2012. Everything we’ve seen thus far suggests that Microsoft has really taken the time to develop a platform that will succeed on tablets, without abandoning the company’s PC roots.

Still a skeptic? You should be. Windows tablet wanna-haves have been burnt before. But please consider these four reasons why Microsoft’s upcoming push into the tablet space may surprise everyone by ultimately proving successful.

Microsoft Has a Chance to ‘Think Different’

“If Windows is to have any hope, its product strategists must not only bring new features to the platform but also must fundamentally reinvent the experience,” analysts J.P. Gownder and Sarah Rotman Epps say in the Forrester report.

Many current upstart tablets are just iPad copycats. They share essentially the same UI (multiple pages of identically sized home screen icons), they operate with nearly identical touch gestures, and they basically look the same. But by being such a relative latecomer to the modern tablet party, Microsoft has a great opportunity to look at what’s not being done, what can be done better, and what can be done differently.

And all this observation can inform a better Windows 8 tablet. Take, for example, Windows 8’s ability to switch from a tablet UI to a desktop UI. This could be a winning innovation.

“We are reaching a point where ARM platforms can deliver us desktop experiences in mobile form factors,” mobile developer Kelly Sommers told Wired.com. If this is true, and if Windows 8 tablets in desktop mode can overcome the performance issues that plagued Windows 7-based tablets, Microsoft might strike gold by delivering two operational environments for the price of one.

Indeed, who wouldn’t want a dual-OS device that can serve as both a casual tablet and as a no-excuses productivity computer? Neither Apple nor the Android contingent have answered this very real consumer problem. 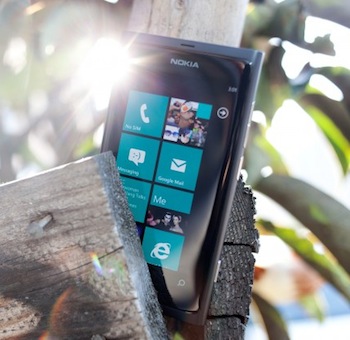 Microsoft had a rocky start entering the mobile space, but has finally found its footing with Windows Phone 7 (and in Mango, Windows Phone 7.5, in particular). Consumers aren’t flocking to Windows’ new mobile OS like they are to iOS or Android, but if you haven’t gotten a chance to try it out, you should — it’s very well done. For a first-hand look, open up https://aka.ms/wpdemo in your mobile browser to give it a whirl.

“I think that what Microsoft learned with Windows Phone will carry over and influence Windows 8,” Display Search analyst Richard Shim says.

Microsoft is working hard to reach out to developers and provide support, marketing guidance, and app visibility through programs like BizSpark and Mobile Acceleration Week to fill out its still meager app offerings. These programs are by all accounts successful, so we can expect that Microsoft will continue them for Windows 8.

Indeed, if Windows 8 is as well-executed as Windows Phone Mango, it will be a positive experience for users. That’s something most Android tablets can’t claim.

And therein lies a very powerful strong point for Microsoft: The Windows Phone platform may not have a copious catalog of apps, or even that many adoptees, but most everyone who actually uses a Windows Phone enjoys the essential OS experience. So, if Windows 8 tablets can somehow get a foothold among vocal opinion leaders, consumer adoption could self-perpetuate as users evangelize the tablets on Microsoft’s behalf.

“I think that ultimately what users are looking for is for their computing experience to follow them around,” Shim says. “Creating a consistent UI across devices is the first step.”

It’s not exactly clear whether all Windows 8 experiences will be able to deliver on Shim’s vision described above, but if any platform has a chance to execute this, it will likely be Microsoft’s. Google doesn’t have a desktop environment to speak of (unless you include browser-based apps), and Apple’s iOS and Mac OS X environments are cleanly split with no easy paths to unification.

But Windows 8 will be a cloud-powered experience through Windows Live SkyDrive. As a result, data, apps and settings will be synced across Windows 8 devices using your Microsoft account. Much like what iCloud is striving to accomplish with a more unified iOS experience, SkyDrive will similarly do for Windows 8.

“A truly consistent experience across every Microsoft device is something new to the space,” Resolve Market Research analyst Randy Hellman says.

So how will this work? Well, first it’s important to note that Metro apps (i.e., Windows 8 tablet apps) are HTML5-based, and will therefore work in any environment — on x86 and ARM devices, on tablets, laptops and full-fledged PCs. This alone provides a windfall for users seeking a harmonious computing experience.

It remains to be seen whether current Windows Phone apps will run on Windows 8 tablets; Microsoft hasn’t officially commented on that possibility. Nonetheless, by using HTML5 as a bridge between tablets and computers, Microsoft has a distinct advantage. For the broad swath of software that HTML5 can support, users should be able to appreciate seamless integration. 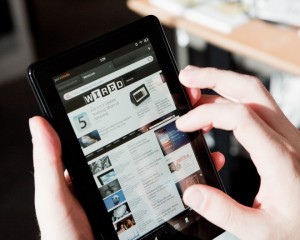 The Kindle Fire offers its own Amazonian brand of Android. Photo: Jon Snyder/Wired.com

Microsoft Will Offer Differentiated, But Not Fragmented, Options

For Windows Phone, Microsoft provides a list of mandatory specs in order to ensure a quality experience across all Windows Phone devices. Microsoft will likely implement the same policy for its Windows 8 tablet devices.

Android, by comparison, lets manufacturers (and carriers) essentially do whatever they want with both software and hardware. This has led to some serious fragmentation issues ranging from OS version incompatibility to inconsistent home-button placement. Even the popular Kindle Fire tablet is a huge departure from other Android tablets, with its own Amazon-centric UI.

“Windows 8 tablets will come in different sizes and different orientations, and have different battery lives depending on their capabilities,” Microsoft representative Christopher Flores told Wired.

This means Windows 8 could become a refreshing, consistent, easy-to-use alternative purchase for anyone not interested in an iPad, whether for philosophical or financial reasons.

Of course, there’s still much we don’t know about Microsoft’s tablet initiative, and all of the what-if’ing above goes out the window once we have real hardware to evaluate.

But Microsoft definitely has the potential to deliver, and from what we’ve seen of Windows 8 tablets so far, the future is promising. Could a Windows 8 tablet be the focus of Microsoft’s final CES keynote? We’re as excited as anyone to find out.

Read 4737 times
Published in News Technologique-Tech News
More in this category: « Say Hello to Memory. It's the New Hard Disk Is Windows Phone's Consumer Focus Killing It? »
back to top