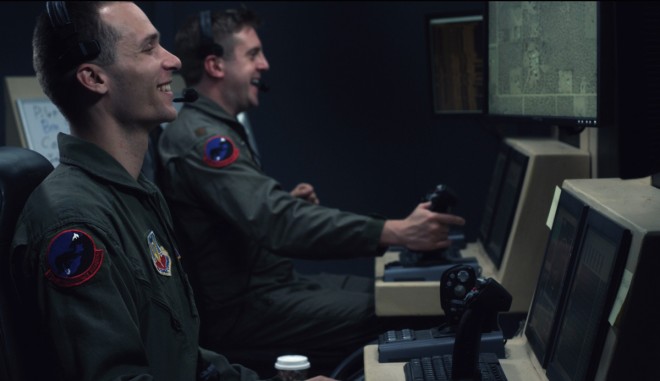 Being a soldier these days can mean driving your SUV to a joystick-ridden office full of gamer-generation co-workers and popping off enough explosives to eliminate a field of people on the other side of the planet. At the end of a day’s work, you hop back in the SUV to pick up the kid at school, grab a pizza and head for your Ikea-decorated home right here in the United States.

Fresh from an extended stint in war-ravaged Kosovo, and struck by many Americans’ detachment from overseas wars, filmmaker Casey Cooper Johnson was compelled to write and produce Unmanned, a short film about a drone operator and his attack-from-a-distance occupation.

Johnson is best known for his award-winning work on Life in Kosovo, a weekly current affairs broadcast he co-produced. It has become that country’s leading investigative TV news show — a 60 Minutes-style watchdog for uncovering crime and corruption.

“I wasn’t a kid who wandered around with a camera,” Johnson told Wired.com. “I went to Kosovo in 1999 to do a social film project with teens who were making films about their experiences. After the project ended, I got excited about our power to tell these stories and kept going.”

Unmanned’s story is fiction, but the lifestyle it depicts — including the recruiting of young warriors-to-be with videogames — is real. Rick Clayfield is an Air Force drone pilot, killing insurgents in Afghanistan by day, kissing his wife and removing the thumb from his toddler’s mouth by night.

One average afternoon, he inadvertently scores high points for a Predator strike — killing civilians and turning his remote control world into a muddy mental trench.

His inner turmoil rolls out like thunder, and suddenly this affable, hip dude is arguing with his spouse, screaming at his child and brushing off young men who admire his warrior status.

Johnson says serendipity had a lot to do with the film. Instead of rehearsing 3-year-old actor Austin James Rodriguez, he had the cast hang out together in his apartment, giving the “parents” an assignment to clean the kitchen, fix lunch and take care of the boy. Read 6696 times
Published in News Technologique-Tech News
More in this category: « How Cornell Beat Stanford (And Everybody Else) for NYC Tech Campus Building Better Single-Page Web Apps »
back to top