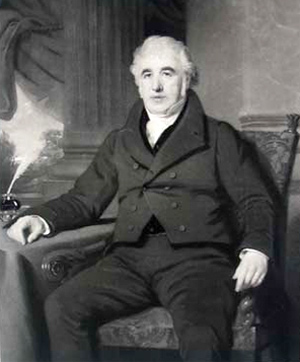 1766: Charles Macintosh, who has no connection whatsoever to the computer of the same name, is born in Glasgow, Scotland. He will be remembered in tech annals as the inventor of rubberized, waterproof clothing. He’s remembered more generally for the raincoat that bears his name.

Macintosh, the son of a well-known dyemaker, developed an early interest in chemistry and science. By age 20 he was already running a plant producing ammonium chloride and Prussian blue dye. Around this time, he introduced some new techniques for dyeing cloth.

In partnership with a certain Charles Tennant, Macintosh developed a dry bleaching powder that proved popular, making a fortune for both men. The powder remained the primary agent for bleaching cloth and paper into the 1920s.

At the same time, though, Macintosh was experimenting with the idea of waterproofing fabric, using waste byproducts from the dye process. One byproduct he worked with was coal tar, which, when distilled, produced naphtha.

Macintosh found that naphtha — a volatile, oily liquid created in the distillation of the aforementioned coal tar, as well as petroleum — could be used to waterproof fabrics. In 1823, he patented what was the first truly waterproof fabric, supple enough to be used in clothing. He produced the desired results by joining two sheets of fabric with dissolved India rubber soaked in naphtha.

When this concoction of his was later used to make a flexible, waterproof raincoat, the garment quickly became known as the mackintosh. (The extraneous “k” has never been explained.) The coat came into widespread use, both by the British army and by the general public.

Which is not to say it was all smooth sailing for Macintosh’s process. The fabric was vulnerable to changes in the weather, becoming stiffer in the cold and stickier in the heat. It was not especially good with wool, either, because that fabric’s natural oil caused the rubber cement to deteriorate.

Nevertheless, the waterproofing process was essentially sound and was improved and refined over time. It was considered effective enough to be used in outfitting an Arctic expedition led by 19th-century explorer Sir John Franklin.

Although he enjoyed his greatest success and lasting fame for his waterproofing process, Macintosh was no one-trick pony. In his capacity as a chemist, he helped devise a hot-blast process for producing high-quality cast iron.

Read 5618 times
Published in News Technologique-Tech News
More in this category: « Gear of the Year Thrasher Magazine's Most Jaw-Dropping Skateboarding Pics of 2011 »
back to top