Jerome Simpson Flips For a Touchdown

We already know Jerome Simpson can flop. It turns out he can flip also. Ok, yes. In my previous post, I blamed the Simpson-flop on Fujita’s Jedi powers. So, maybe he can’t actually flop. Nonetheless, I feel compelled to post a quick analysis of this flip. You know, just to provide full coverage of Jerome Simpson. Here is the flip.

Wow. He stuck that landing, right? No. He put his hand on the ground. I am pretty sure that would count the same as a fall. Impressive anyway.

Now for an analysis. Sometimes, I start with a question. For this motion, let me just create a plot first. Of course, I will use Tracker Video. This video isn’t too bad as far as analysis goes. Most football videos have some type of weird camera angle. For this one, the camera seems far enough away to not matter too much. Oh, if you want to analyze a video like this with Tracker, let me suggest that you use calibration point pairs. Trust me on this one. Here is my first plot. This is the horizontal (x-axis) motion of my guess for Simpson’s center of mass (which I approximate as being around his waist). 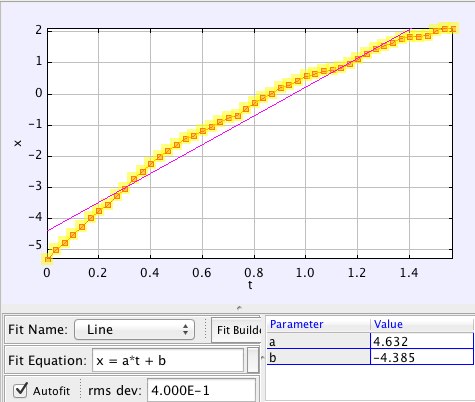 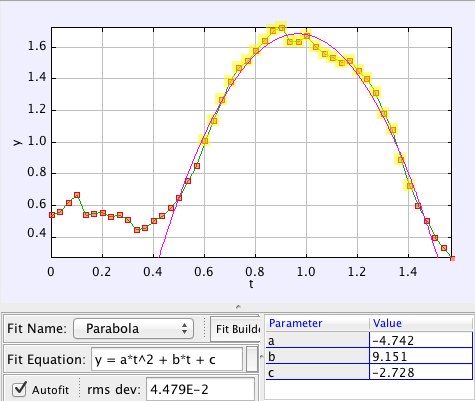 How high did he jump?

How do you do a front flip anyway?

I guess this would actually be a front tuck, right? Well, the key here is that during the time you are in the air, your body needs to rotate 360°. Simple, right? Anyone should be able to do that. Well, anyone but me. How do you make yourself rotate? You need to start with some rotation. You can increase your rotation rate if you need to by pulling your legs closer to your center of mass. This will decrease your “angular mass” (moment of inertia) and increase your angular velocity so that your angular momentum is constant. For Simpson, how long was he in the air? Looks like about 0.8 seconds. What about his rotation speed? I guess the best thing would be to look at Simpson’s change in angular position during the flip. Looking at the angle his torso makes with the horizontal, he starts the jump at about 82°. On landing, he is at about 72°. This gives an average angular velocity of:

Why did I just calculate that? Not sure – it doesn’t really show too much.

Whenever I look at some sports topic, I think to myself “what would Sport Science do?” Sport Science would want to have one number to represent this awesome move. If I had to guess, they would either use power or force (pretty sure those are their two favorite things). So, how about I calculate the power Simpson would need to do this? What is power? Basically, it is the change in energy over time. How much work in how much time.

For the energy, Simpson needs to do two things. First, he needs enough energy to increase his center of mass by 0.46 meters. Second, he needs to increase his rotation rate – well, actually, he needs to slow down his rotation rate also. Let me just assume that he needs to increase the rotation rate up to 8.07 radians per second. I do need to know/assume some things. Let me use a mass of 94 kg for Simpson plus his equipment (based on Wikipedia). For the rotational energy, I need to estimate his moment of inertia (which I like to call angular mass). If I assume that he is straight all the time (which he isn’t) he would sort of be like a stick. A stick has a moment of inertia of:

Let me just use a value a bit smaller (by 3/4) for this motion. So, the total change in energy for Simpson would be:

Using my values, I get a change in energy of 486 Joules. Now for the time. How long does the “jumping part” of the motion take? Well, the pushing off the ground part takes about 0.133 seconds. Of course during this time he is probably just “jumping” and not rotating (I think I made a mistake by including the rotational energy). Let me just use a change in energy of 423 Joules. With that time, I get a power of about 3000 Watts. So, there is your number.