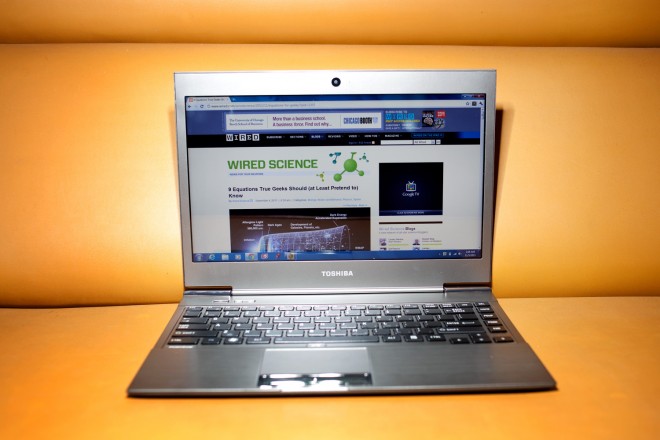 The Toshiba Portege Z835 made its debut to the ultrabook sphere in 2011. Photo: Ariel Zambelich/Wired

At last year’s Consumer Electronics Show in Las Vegas, you couldn’t throw your schwag bag across the show floor without hitting a 3-D television or Android tablet. This year’s hottest gadget? It looks like it will be the ultrabook.

Super thin and remarkably light, ultrabooks are expected from all the major PC manufacturers. Tablets aren’t going away by any means, but you can expect CES 2012 to be dominated by this emerging notebook category that’s being heavily pushed by Intel.

Intel, in fact, coined and trademarked ultrabook as a marketing term, using it to differentiate high-performance, ultra-portable, Intel-based notebooks from more mainstream, bottom-feeding notebooks and tablets. Apple proved to the world that this product category has legs via the success of its MacBook Air, and now Intel (and its partners) want a piece of the action too.

Intel says that to qualify as an ultrabook, a notebook must meet stringent criteria: It must weigh no more than 3.1 lbs, be no more than 0.71 inches thick, and provide five-plus hours of battery life. Even more germane to the consumer experience, it must boast flash-based storage, and incorporate Intel’s Rapid Start Technology for speedy boot times.

At CES 2012, you can expect to see 30 to 50 ultrabook models from Dell, HP, Toshiba, Acer, Asus and Lenovo, a few of which already have ultrabooks in their arsenals of shipping products. Most of next year’s ultrabooks will be in the $1,000 to $1,200 price range, and that’s a problem, according to Display Search analyst Richard Shim, who says these devices need to be priced around $699 to appeal to mainstream consumers.

“The challenge is that you’re trying to make a premium product mainstream,” Shim says. “It’s sort of an oxymoron, because as soon as it’s mainstream, it’s not premium anymore.”

Forrester analyst David Johnson says, “Apple has proven that people will pay a premium for style, but only time will tell if that magic can be applied to ultrabooks intended for Windows.”

Although ultrabooks are a response to consumer demand for more tablet-like computing experiences, they won’t be displacing the tablet at CES 2012. “I think ultrabooks and tablets will share dual billing,” Shim says of this year’s CES. “They offer kind of the same experience, so ultrabooks might be the headliner, but tablets are the next act.”

Forrester analyst David Johnson adds, “While the ultrabooks are thin, light and offer instant-on convenience, the tablet will still have a place in the computer bag for reading, reviewing documents, and informal discussions or presentations.”

As far as specs and features announced at next week’s CES, don’t expect any huge changes from the ultrabooks we’ve already seen. Your average ultrabook will have a 14-inch screen, Intel Core i5 processor, and between 128GB and 256GB of SSD storage.

“At this stage, it’s still hardware design and price competition. Who can get thinner, lighter,” Shim says. So, while we probably won’t see any one-pound ultrabooks this year, there are other ways an ultrabook might distinguish itself from the competition. 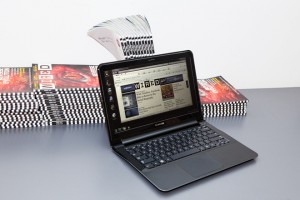 The Samsung Series 9 was one of the first Windows ultrabooks to launch. Photo: Jon Snyder/Wired

Manufacturers could use more “exotic case materials and innovative designs,” Johnson says. Samsung’s Series 9, for example, is made of Duralumin alloy, a material that is also used in aircraft manufacture. Battery life, display quality and screen resolution are other areas that ultrabook makers can capitalize on.

“Ultimately, the real value will be when you complement that with software, and Windows 8 will help with that,” Shim says.

Windows 8 won’t be shipping until mid-2012 at the earliest. This means ultrabooks won’t really begin to shine until later this year and early next year — we’re just in the “build-up phase” right now, Shim says.

Johnson says Intel’s 22nm Ivy Bridge processors will drive a new crop of Ultrabooks towards the middle of 2012. We could also see “retina”-quality displays up to 2880×1800 resolution arriving toward the end of the year. Other updates to expect: higher-capacity Lithium-Polymer batteries and ever larger SSD capacities becoming available as new models are released.

What about desktops and high-performance notebooks in 2012?

“There will always be a segment of the audience looking for higher performance systems,” Shim says. “Just like with cars, there’s guys looking for muscle machines and hot rods.”

Read 9656 times
Published in News Technologique-Tech News
More in this category: « Swing Till You Puke&mdash;Inside a Nuclear Cooling Tower Catherine the Great Put Rollers on the World's First Coaster »
back to top