Mogees Project Turns Any Surface Into a Gestural Musical Interface 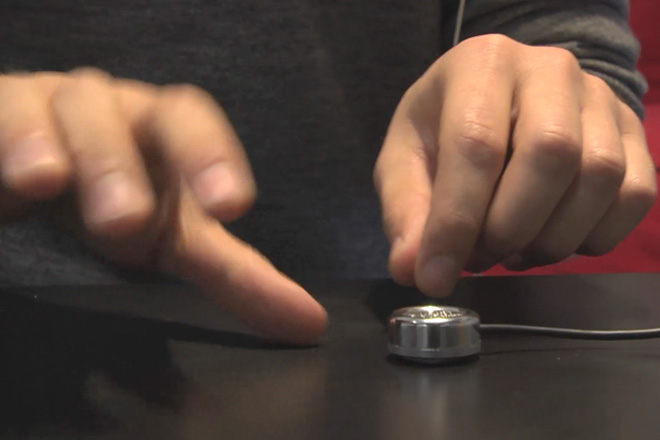 Mogees uses contact microphones and software to turn any surface into a synthesizer.
Photo: Mogees

Mogees is a project that uses microphones to turn any surface into an interactive board, which associates different gestures with different sounds. This means that desktop drummers could transform their finger taps and hand slaps into the sound of a marimba or xylophone.

Users plug any contact microphone onto a surface — be it a tree, a cupboard, a piece of glass or even a balloon. They can then record several different types of touch using their hands or any objects that cause a sound — so one sound could be a hand slap, another could be a finger tap and another could be hitting the surface with a drumstick.

The different gestures can then be associated with different sounds. Then when the user wants to perform, the Mogees software will recognize which of these types of touch is closest to the one that the user is doing and then enable the corresponding sound engine or synthesizer. The tone of the synthesized sound is influenced by the actual sound picked up by the microphone. So you could use the same gesture — for example a tap — in different places on the surface and it would create the sound in a different key. (Check out a video of the system in action below.)

Mogees currently uses two audio synthesis techniques — the first is physical modeling, which consists of generating the sound by simulating the propagation of the sound wave through different physical materials such as strings, membranes or tubes using a piece of software called Modalys.

The second technique is mosaicing, where the user loads a sound folder and then the audio coming from the contact microphone is analyzed and the software looks for the closest segment within the sound folder. So if a sound folder of voices is loaded, touching the surface gently would provoke a whispering, while scratching it will cause a sound similar to screaming voices.

The Mogees project has been developed by Bruno Zamborlin, a Ph.D. student at Goldsmiths, in collaboration with Frederic Bevilacqua, Norbert Schnell and the real-time music interaction team at IRCAM.

Zamborlin told Wired.co.uk that the idea of using contact microphones comes from the desire to turn ordinary objects into percussive instruments. “We wanted percussionists to take full advantage of electronic music without losing the feeling of touching a real surface,” he explained. “I would love to see people stop watching their tiny touchscreen all the time and start taking more advantage of what they already have around them. More artistically speaking, I find midi controllers a bit boring as they don’t permit any relationship between the gesture of users, such as moving a knob, and its effect. Touching real surfaces allows users to experience haptic feedback on what they do and enhancing their relationship with the device.”

Zamborlin is working with a IRCAM composer called Lorenzo Paglieli to develop a live performance that would see percussionists play on regular surfaces.