Here’s a bookend to the Food and Drug Administration’s disappointing Christmas Eve notice that it will cease trying to regulate the largest classes of growth-promoter antibiotics. Today, the agency announced that it is forbidding certain uses of a different class of drugs, cephalosporins.

Good: The FDA is taking regulatory action, a strong contrast to the “voluntary reform” path it declared itself in favor of last week.

Bad: Cephalosporins are one of the least-used of the agricultural antibiotics. According to the FDA’s Summary Report on Antimicrobials Sold or Distributed for Use in Food-Producing Animals, there were only 24,588 kilograms (54,207 pounds, or 27.1 tons) of cephalosporins used in food-producing animals in the US in 2010, compared to 5.6 million kilograms (12.3 million pounds, or 6,164 tons) of tetracyclines.

Good: Cephalosporins are a critically important drug in human medicine, especially for kids. (One common cephalosporin is Keflex.) Because some classes of antibiotics aren’t approved for pediatric use, the options for treating infections in children are more limited, and thus protecting the remaining drugs’ usefulness is vital, as the American Academy of Pediatrics warned the FDA in 2007.

In its Federal Register notice, the FDA said: “We are issuing this order based on evidence that certain extra-label uses of these drugs in these animals will likely cause an adverse event in humans and, therefore, present a risk to the public health.”

“I think this signals the FDA is very serious about antibiotic use in agriculture, since it started with one of the most important tools in the medicine chests of physicians,” Laura Rogers, who is project director of the Pew Charitable Trusts’ Campaign on Human Health and Industrial Farming, told me. She noted too that the FDA listened to concerns from the agricultural side by preserving some uses of cephalosporins, notably two drugs within the class — ceftiofur and cephapirin — to treat specific diseases including foot rot, metritis and staph mastitis in cattle.

Just to be clear: Cephalosporins are not used as growth promoters, via feed (unlike the penicillins and tetracyclines in last week’s notice). But they are used prophylactically, for disease prevention. For instance: The vast majority of the almost 9 billion broiler chickens raised in the US each year get a shot of a cephalosporin into their shells, to “reduce mortality” of newly hatched chicks. Under this order, that is an extra-label use and will be disallowed. 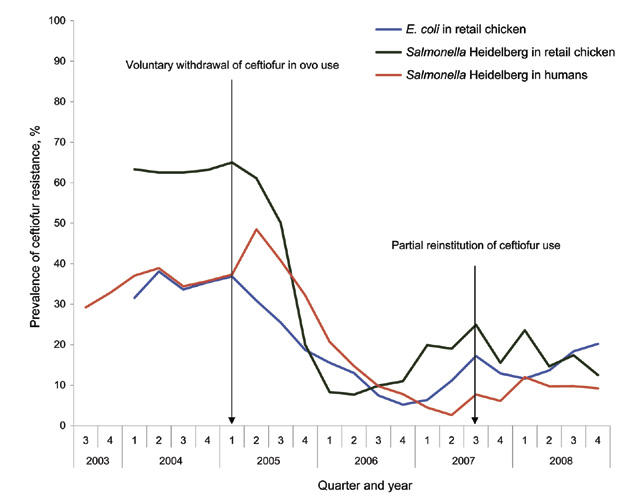 The concern underlying this order is that when cephalosporins are used, they promote the emergence of cephalosporin-resistant bacteria that then go on to cause human disease. That was made very clear by very solid research from Canada (here’s the 2009 paper and my post explaining it). When chickens in Quebec were raised with the use of cephalosporins, cephalosporin-resistant Salmonella emerged in chicken meat sold at retail, and also in people in the province — note, not people who had eaten the chicken that was tested. When Quebec enacted a ban on hatchery use of the drug, the incidence of resistant Salmonella crashed in both birds and humans. When — in an unfortunate natural experiment — the province reauthorized some uses, the rates in both chicken meat and humans began creeping up again.

Campaigners against antibiotic overuse in agriculture want to stress the point that the resistant organisms didn’t remain confined to the chickens. Once resistance DNA debuts in bacteria, it can move around freely to other foodstuffs, and even to other bacteria as well. Thus, as the Center for Science in the Public Interest pointed out today, there were five major outbreaks of foodborne, cephalosporin-resistant Salmonella in the US in the past decade, and none of them were caused by chicken.