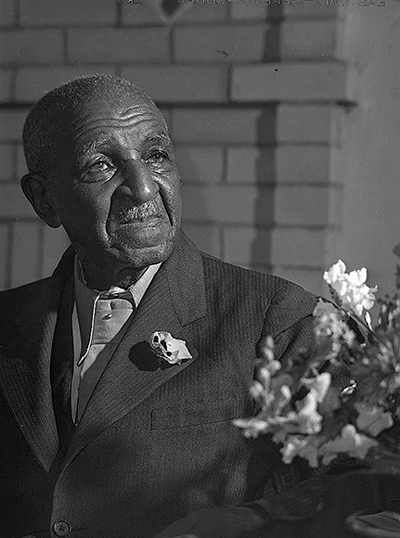 1943: George Washington Carver dies, leaving a legacy of a revived and diversified Southern agriculture and hundreds of new and improved food products. Think of him whenever you’re enjoying peanut butter.

Carver was born into slavery in Missouri sometime in the first half of the 1860s: The exact date is unknown. His father was killed in an accident before George was born. Slaveholder Moses Carver sent his slaves to Arkansas during the Civil War, and though George’s mother was never heard from again, the boy was returned to the Missouri plantation at the end of the war.

He was no longer a slave, but he was frail and not hardy enough for field work. Instead he helped with household chores and gardening. Carver developed considerable knowledge of local vegetation and gained a reputation as a “plant doctor” who could nurse sickly plants back to health.

Carver left the plantation and set out on his own at about age 10. He supported himself as a household worker, cook, laundryman and farmhand. He picked up a high school education in Minneapolis, Kansas, and went on to study at Simpson College in Iowa.

An art teacher there recognized Carver’s skill with plants and encouraged him to enroll at the Iowa State College of Agriculture and Mechanic Arts (now Iowa State University). He was the first black student to enroll there, and he excelled in classes and extracurricular life.

Carver received a bachelor’s degree in 1894 and was invited to join the faculty (again the first black) as assistant botanist for the College Experiment Station. He published work on plant diseases and fungi, gaining national recognition and a master’s degree.

Booker T. Washington invited Carver to join the faculty of the Tuskegee Normal and Industrial Institute in Alabama in 1896, and Carver became its director of agricultural research. Carver sought to revitalize Southern agriculture through research, education and diversification.

The continuous cultivation of single crops (cotton in some places, tobacco elsewhere) had seriously depleted soils throughout the South. Carver recommended planting peanuts, soybeans and other legumes, because these could restore nitrogen to the exhausted and eroded soil. He also advised Alabama farmers to plant sweet potatoes.

The first farmers to follow these suggestions got good results, but couldn’t find the market to make their new crops profitable. So Carver set about finding new uses for the crops.

Carver carried the Iowa State Extension idea to the South, encouraging the teaching of new techniques to local farmers in their own communities. The boll weevil pest was destroying the South’s cotton economy, and Carver’s contributions came just in time to save — and transform — the region’s agriculture.

He stayed at Tuskegee for the rest of his life, turning down job offers from other colleges and from industry magnates Henry Ford and Thomas Edison. Praised by many white leaders for his scientific contributions and his cooperative attitude, he was criticized by some black leaders for what they felt was excessive deference or even subservience.

By the time of Carver’s death, peanuts had risen from insignificance to one of the six leading crops in the nation — and second in the South. Among many other honors, Carver is enshrined in the National Inventors Hall of Fame and the Hall of Fame for Great Americans.