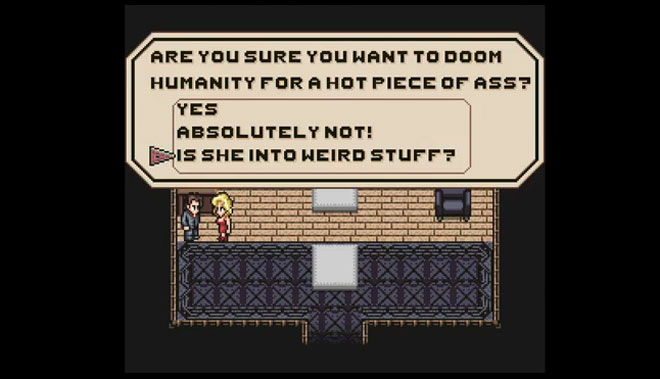 The beautiful space opera that was Ronald D. Moore’s reboot of Battlestar Galactica might have been some of the most engrossing television ever to hit Syfy. But, let’s face it, there were some moments that were just begging to be called out for their borderline absurdity (seriously, what was up with Fat Lee Adama?).

Now, thanks to the folks at CollegeHumor and their ninja-like 16-bit game creation skills, we have a wonderful summary of all four seasons of the show boiled down into a short-but-sweet bit of Battlestar nerd bliss.

In the four-plus minutes of this video very few mock-worthy plot points aren’t called out. Is there a riff on Baltar’s uncanny weakness for both Number Six and hair gel? Yes. How about a moment to really question why we were supposed to be surprised when Cylon Sharon shot Admiral Adama? Check. Is there time to talk about why Fat Lee got magically skinny again? You bet! What about a solid side-eyeing of just about everything that happens in the final season? Yep, that’s there too.

Check out the video below and let us know in the comments what you liked best, and what you think CollegeHumor missed. We know one thing though, those kids on Portlandia could’ve saved themselves a lot of time and heartache if they’d just watched this video before their marathon.

Read 15486 times
Published in News Technologique-Tech News
More in this category: « The New Year in Space: NASA's Missions and Events in 2012 Economist: Fuel-Efficiency Gains Saddled by Trend for Beefier, Faster Autos »
back to top