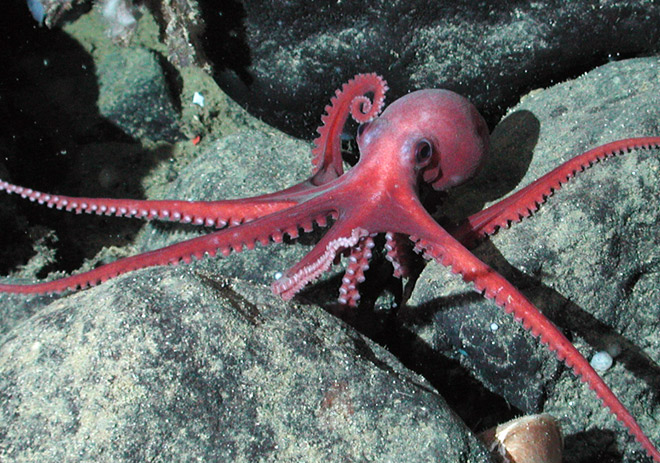 An octopus dwelling in the frigid waters of the Antarctic doesn’t wear gloves on its tentacles, but it has found another way to endure the cold. A new study shows that this animal uses a trick called RNA editing to customize crucial nervous system proteins to work at low temperatures. The paper is the first to reveal that RNA editing, not just changes to a specific gene, can lead to adaptations.

Low temperatures hamper certain proteins that allow the nervous system to send signals. When a nerve cell fires, protein channels in its membrane open or close to allow various ions in or out. And when the electrical charge across the cell membrane returns to normal, the ion channels that let potassium ions out shut. But frigid temperatures can delay the potassium channels’ closing, hindering the neuron’s ability to fire again. So researchers hypothesized that species inhabiting frigid climates have modified their potassium channels so they work better in the cold.

Molecular neurophysiologist Joshua Rosenthal of the University of Puerto Rico Medical Sciences Campus in San Juan and his graduate student Sandra Garrett figured they knew how that adjustment would occur. “We thought we were going to see changes at the level of the gene,” Rosenthal says. That is, they expected the potassium channel genes from cold-living species would have evolved so that they produce a slightly different protein that performs better at low temperatures.

The pair recently tested their suspicion by comparing an octopus species that lives in frigid Antarctic seas with another dwelling on a Puerto Rican reef where the water ranges from 25° to 35°C. To their surprise, they found that the potassium channel genes in the two species had almost identical DNA sequences. Next, the researchers inserted the genes into frog egg cells, which then manufactured each protein and installed it in their plasma membrane. This procedure allowed the researchers to measure the electrical activity of each species’ channel.

So how does the polar creature keep its nerve cells firing normally? There’s another way, RNA editing, to change a protein. To make the protein coded for by a gene, cells synthesize an RNA version of the DNA that serves as a blueprint to construct the protein. During RNA editing, cells amend the nucleotide sequence of the RNA, which can alter the sequence of amino acids in the resulting protein and change the protein’s function. The Antarctic octopus edits its RNA at nine sites that change the amino acid sequence of the potassium channel, the researchers report online today in Science. One of these sites, known as I321V, was particularly important for adapting to the cold: The change more than doubles the potassium channel’s closing speed.

The researchers also gauged the amount of RNA editing in two more tropical species, two temperate species, and two species that live in the Arctic. The colder the species’ habitat, the more likely it was to make RNA edits at the I321V site. “What our paper really adds,” Rosenthal says, “is that this process can be used to help adapt to the environment.”

Other researchers praise the study for revealing a new way for organisms to adapt. “There’s this whole different molecular mechanism for increasing protein diversity,” says molecular neurobiologist Ronald Emeson of the Vanderbilt University Medical Center in Nashville. Whether RNA editing shapes other traits is the next question to answer, adds geneticist Brenton Graveley of the University of Connecticut Health Center in Farmington. The paper “sets the stage for showing that RNA editing can have a big role in adaptation,” he says.