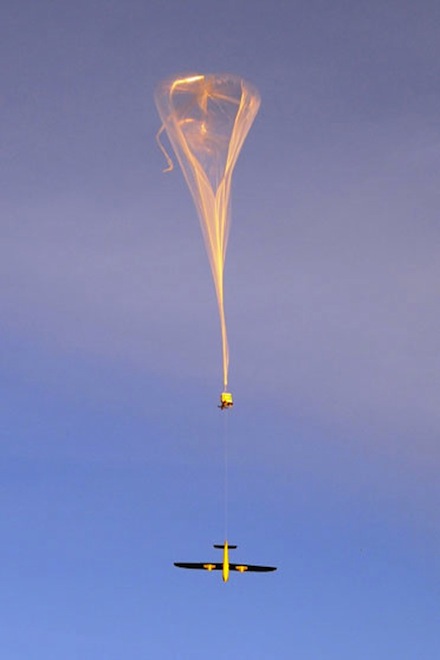 It just might be the most convoluted spy program in the Pentagon’s history: Fly a balloon up to 60,000 feet, and have it unleash a drone. Then, have that drone deploy several smaller surveillance drones that glide to the ground and collect data. Rube Goldberg, call your office.

The elaborate plot comes courtesy of the Naval Research Laboratory (NRL), which recently announced successful completion of flight tests for their new, Autonomous Deployment Demonstration project. The goal sounds simple enough: land small, sensor-laden drones at precise locations, without being detected. That’d allow military personnel to have better intel inside enemy terrain, and avoid putting themselves in harm’s way to deposit the devices.

But the anodyne title and seemingly simple goal don’t begin to get at the complexity of the project.

The Navy started with a high-altitude balloon. To the end of the balloon, they attached a simple, mid-sized Tempest drone — each one has a 10-foot wingspan and can carry a 10-pound payload.

But we’re not done yet. The Tempest, in turn, is carrying two tiny Cicada drones — one under each wing.

The Cicada drones are tiny gliders, each about the size of a small bird and undetectable to radar. Plus, because the drones don’t have a motor or propulsion system, they’re essentially noiseless.

And their simple construction and inexpensive airframe means that the drones are disposable. The Cicada’s wings are made of nothing more than custom-printed circuit boards, which contain a basic navigation system and the requisite sensors for a given job.

Their drones-within-a-drone-within-a-balloon contraption complete, the Navy conducted a series of eight aerial tests. And — shazzam! — the clever plot worked: Unleashed at 57,000 feet, the Tempest drones traveled as far as 30 nautical miles before unleashing their Cicada cargo. Once deployed, the Cicada drones glided an extra 11 miles, and landed an average of 15 feet away from their target locations.

“The mission profile is straight forward,” Chris Bovais, an NRL aeronautical engineer and flight test coordinator, said in a statement. “The Cicada is dropped from another airborne platform, flies to a single waypoint, and then enters an orbit. It descends in that orbit until it reaches the ground.”

Brace yourself, Bovais, because this “straight forward” scheme is expected to get a little more complex. Eventually, the Navy hopes to deploy hundreds of Cicada drones from an aerial vehicle, and disperse them to deluge a hostile area with secret sensors.

Read 18471 times
Published in News Technologique-Tech News
More in this category: « Latest Chrome Beta Prerenders Websites You're Likely to Visit Help NASA Code Its Way Through Space »
back to top