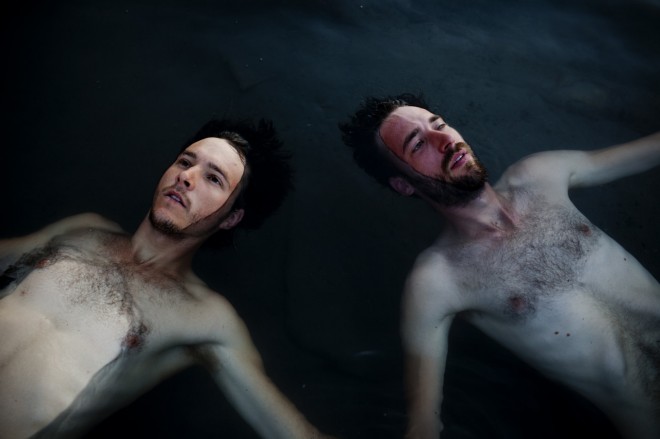 One car was parked a couple exits up the freeway to keep a lookout. Meanwhile, the rest of the group lugged the body of a dead, 250-pound bear across six lanes of traffic and loaded it into the bed of a pickup.

Back at the house, the crew proceeded to tear into the roadkill, separating the meat, fat, skeleton and hide. The testicles were preserved in a jar of alcohol and placed on the spice rack next to a free-range squirrel head.

Adventures like this have not been uncommon for Tim and Noah Hussin (above), brothers and journalists who have been biking across America for over a year now. After raising a little over three thousand dollars on Kickstarter, they set out to document people who they believe are re-thinking American values toward community and challenging the cookie-cutter lifestyle of the suburbia the brothers grew up in.

“It’s changed me in so many ways that it’s hard to pinpoint any one way,” says Tim. “I’ve had to confront a lot of things that I’ve never confronted before — everything from alternative ways of living to my own loneliness to the everyday challenges of finding a place to stay and finding enough food to keep you healthy. I’ve definitely grown a lot.”

With most of the country experiencing hard times for the last few years, many young adults, and young journalists in particular, are feeling uncertain about their future. Heading out on the road can be a way to take back control of one’s destiny and grow as a person and hone one’s storytelling chops.

Raw File hears of so many of these projects, it almost seems like an epidemic. Multimedia producers Michelle Cassel and Ryan McAfee, for example, have also left their normal lives behind and headed out on their bikes to see the world. 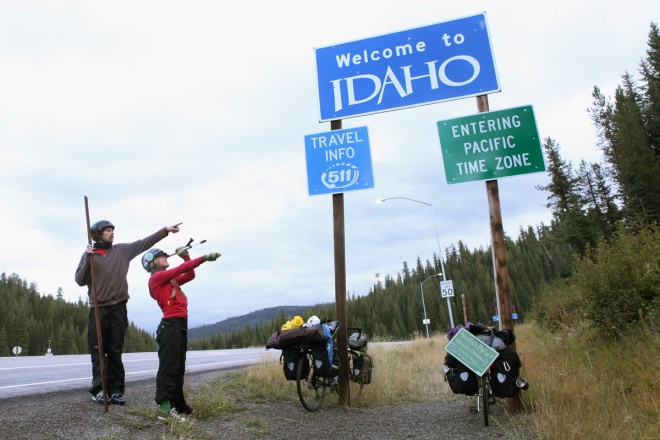 “I needed to get out and meet good people,” Cassel says. Before the trip, she was based in Los Angeles and became fed up with the rat-race culture of Southern California. The golf tournaments and wine tastings she was covering were not the stories she believed in. McAfee, who was based in Las Vegas, was also sick of clawing his way through the freelance world. “I was just kind of stalled,” he says. The pair were good friends (and just friends, they say), so they hit the road to shake things up.

Both biking pairs say their trips are not only a reaction to the economic downturn, but also an attempt to confront the evolution of a journalism industry that has become less concerned with good storytelling and all-consumed by how fast they can update websites.

The bear episode, for example, was just one part of the brother’s five-month stop in Asheville, North Carolina. At the time they were staying with and documenting a group of people living in an “urban homestead” – an urban property that generates enough resources to completely support its residents.

During those five months they not only learned how to scavenge and prepare roadkill, but also picked up some construction skills and perfected the art of dumpster diving (the video they produced from this time period is posted below). The Hussin brothers also spent last summer in New Orleans and are currently hanging out in the communities that surround Big Bend National Park in southwest Texas. The stories from these locations have yet to be published.

It’s been over a year since the brothers hit the road and they don’t plan to finish any time soon. “We are not in a rush, that’s not the point,” Tim said. “We intentionally let all that stuff go and have taken advantage of moving slowly.”

Cassel and McAfee finished their trip in November. They couldn’t spend as much time in each stop as the Hussin brother, but they share the desire to slow down and document the world at their own pace.

In Kentucky, Cassel and McAffee spent a day following a former coal miner who made them re-think their hard-line environmental opposition to the coal industry (video below). Cassel says the miner clearly saw the environmental degradation associated with coal, but he also helped them understand how communities across the country would be financially ruined if the coal industry disappeared.

In the process of exploring other people’s lives, each rider said they’ve gone through an important series of personal changes. Not every day is profound, however. Sometimes the trip is just about endurance.

“A hill ends,” Cassel said. “But with the wind, it’s just constant and you have no idea when it’s going to let up. It completely demoralizes you. I don’t know how many times I just had to stand there and scream ‘Stop it!’”

To travel as lightly as possible, both pairs shot most of their video with a Canon 5D Mark II. They’ve used Zoom H4n audio recorders, laptops and edited on small hard drives. When a story was complete, they’d publish it to their website along with updates from the road.

The Hussin brothers say they would like to eventually produce a book, a feature-length documentary film and maybe a layered and interactive website. Cassel and McAfee, who are back in Los Angeles, said they are trying to avoid cars and day-dreaming about when they can get back on their bikes.

To see more of Tim and Noah’s work, please visit their americarecycled.org.

Read 18451 times
Published in News Technologique-Tech News
More in this category: « Massive Galaxy Cluster Caught in Midst of Violent Merger Mozilla Gets Down to Business With Slow-Burn Firefox »
back to top