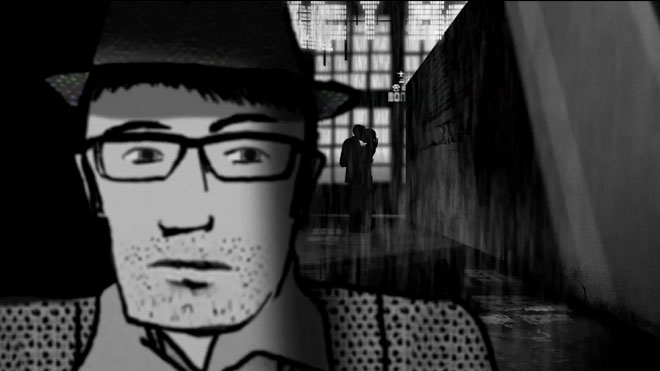 The new video for Death Cab for Cutie's “Underneath the Sycamore” tells a noir detective tale.

“Underneath the Sycamore,” the latest single by charming rockers Death Cab for Cutie, gets the noir detective treatment thanks to the clever work of the animating team known as Walter Robot.

The clip, premiering below, follows cunning hipster private eye Mojowski as he searches desolate streets for a missing woman. From the last place she was known to be to the last man she was seen with, he follows her footsteps until he finds her on a roof about to jump.

It wouldn’t seem that a song about trees and togetherness would fit a dark, dreamy clip like the one Walter Robot made, but the video finds its moments of unity when frontman Ben Gibbard sings, “I know you’ve got a vengeful heart” and “you have seen your darkest rooms.”

“Their storytelling and beautiful animation has brought our song to life in ways we never expected,” Death Cab bassist Nick Harmer said in an e-mail to Wired.com. “We are very excited to share this with everyone.”

“Underneath the Sycamore” — off the band’s latest album, Codes and Keys — isn’t the first Death Cab video made by Walter Robot, otherwise known as artist Bill Barminski and Christopher Louie. They also made the band’s 2009 “Grapevine Fires” video (note what’s playing in the movie theater in the “Sycamore” clip).

“Our close collaborations with the band has and will continue to inspire our best work,” Louie said in an e-mail to Wired.com. “We’re really looking forward to rounding these videos out into the Death Cab for Cutie animated trilogy!”

Check out the video below and then hit the comments to let us know what you think — was it real or all just the dream alluded to in the song?

Read 18815 times
Published in News Technologique-Tech News
More in this category: « First-Class Fidelity Microsoft Bets Big on Kinect for Windows, But Splits Its Community »
back to top