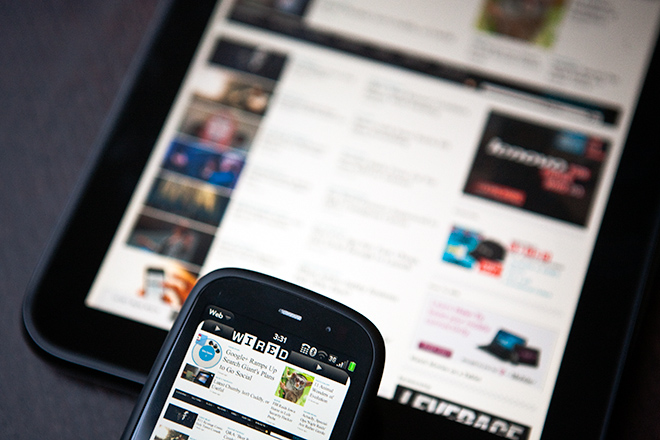 HP's webOS had a feature called Touch to Share which allowed information to easily sync between devices, like the TouchPad and the unreleased Pre 3. Photo by Jon Snyder/Wired

These days, accessing the same files across multiple devices can be a feat. Services like Dropbox can help transfer files from one device to another, but it’s not the most elegant solution.

We’re moving toward a world in which you can swipe, flick and tap to share data from one piece of hardware to another, effortlessly. One where you never have to worry about which device you stored that file on. We want a seamless, integrated computing experience.

Software company Nsquared is working hard to make this a reality. Using a Windows Phone 7 device, a Slate tablet, a large Kinect-controlled television display and a Microsoft Surface smart table, Nsquared came up with a model for how information can be shared and manipulated among a variety of like-branded devices.

When the smartphone is placed on the Microsoft Surface smart table, information instantly branches out onto the table around the perimeter of the phone, displaying the e-mail itself in larger text to the left while other relevant information sits above the top of the phone. The information can be touch-manipulated from either the phone or the table.

But mobile OS developers themselves have also started implementing features that are bringing us towards a completely integrated computing experience.

HP’s webOS could have offered a really convenient way to share and sync data between devices (before HP killed off its mobile hardware division, that is). The “Touch to Share” feature allowed things like open web pages to be shared between webOS devices like the HP TouchPad and the Veer smartphone with a simple nearby wave.

We’ve also seen that Apple is taking steps toward making seamless computing a reality. Apple’s iCloud service will help make data a non-issue as you switch from one device to another, and iOS 5 will have AirPlay mirroring, so you can wirelessly stream video on your iPad to a larger display. A patent for projection technology, with a feature that allows for information to be swapped from one projected display to another, is another forward-looking implementation of the concept. And if rumors prove true, Apple’s got some sort of revolutionary television up its sleeve that would have iOS integration. You could use your iPhone as a controller for games using its accelerometer and gyroscope, easily swipe what’s playing on your iPad to the TV, and then back to your phone or MacBook Air.

Samsung, which makes a variety of smartphones, televisions, and tablets, is another solid contender for developing its own in-house, completely seamless computing experience. Though it isn’t remarkably popular here in the U.S., the company could use its Bada operating system across its devices to unify the experience and allow for information to easily be shared, swiped and synced between devices.

With its new Tablet S and Tablet P, e-readers, and televisions, Sony is another company that could break into the space if a software platform was unified across its different devices.

There’s obvious incentive for companies to provide a high degree of compatibility and integration between its devices — it means you’re more likely to buy more of their products, rather than their competitors. Customer loyalty.

Currently, Apple is the only one who seems to really be taking advantage of this in-house, but as Nsquared’s video shows, it could certainly be accomplished with other-brand devices.

Read 2139 times
Published in News Technologique-Tech News
More in this category: « Google Certificate Hackers May Have Stolen 200 Others Gender Gap Vanishes in Female-Empowered Cultures »
back to top