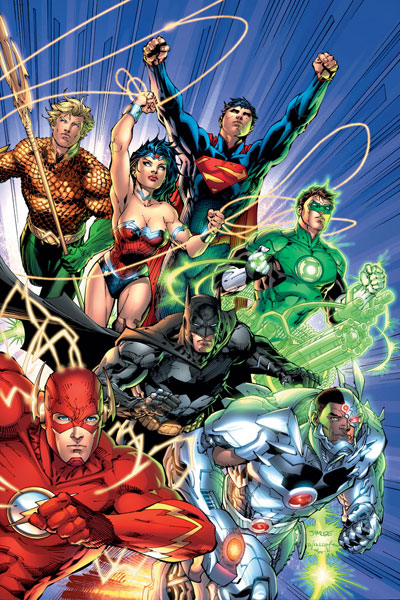 But it remains unclear from Justice League’s renumbered first issue — which kick-starts the publisher’s postmillennial makeover of DC Universe’s 52 series and their superheroes’ origin stories — whether the new normal has anything better to offer than last century’s model.

This is not to say that Justice League No. 1, out Wednesday, is simply trying to woo a new generation of younger readers by lamely name-dropping Transformers and such, although it does that, too.

And it’s definitely not a bust: Written by Geoff Johns with art from Jim Lee and Scott Williams, Justice League No. 1 is already sold out, although not at the astounding levels that transformed comics from lowbrow pastimes to cultural supernovas.

But as the initial salvo in DC’s New 52 campaign, whose market-speak promises to change the industry’s status quo, Justice League No. 1 says more about the target demographic’s narrow bandwidth and martial mindset than its expansive possibilities.

Here are five ways in which the Justice League’s reboot portends troubling trends. Spoilers ahead, noobs.

Green Lantern’s Not Too Bright

Green Lantern, whose box-office bomb finally revealed him to be a bench-warmer on DC’s hotshot roster, has a mouth that doesn’t quit, and he uses it mostly to berate the much superior Batman’s lack of powers.

He’s usually rewarded for his cockiness by getting his ass kicked by one of Darkseid’s minions, Superman or Batman, who emasculates him by removing his power ring without breaking a sweat. That’s bad news for a superhero whose Justice League No. 1 cover shot features a glowing green gun turret where his penis should be. More lame in-fighting from Superman, Batman and Green Lantern is due in Justice League No. 2, due in October.

Plus, as the self-proclaimed protector of Earth’s space sector, it’s kind of hard to believe Green Lantern has no clue that Batman is real. I know suspension of disbelief is a must when it comes to comics (and pretty much everything else). But it seems like Johns is leaning on that too hard in order to put smart-ass dialog into Green Lantern’s speech bubbles.

Can’t We All Just Get Along?

One thing that truly rules in Justice League No. 1 is the action, which befits newer generations raised on light-speed CGI cinema. Darkseid’s spider-borg minion, who’s planting mysterious megabombs in Gotham City, is a fearsome beast, and watching Green Lantern and Batman try to take it down is a blast.

But listening to them bicker the entire time, and seeing them battle Superman at the comic’s end, is illogical and worrisome.

As DC Comics’ greatest writer, Grant Morrison, told Wired.com in July, “As we enter the age of superhumanity,” superheroes should serve as our “role models.” The fact that they spend the first days of their union fighting and sniping like territorial punks says more about our new century’s new abnormal than it does about our optimistic possibility. And probably not on purpose.

Take a good look at the heroes on the cover of Justice League No. 1 above. They’ve all received new costumes as part of DC’s “New World Order,” as the issue’s behind-the-scenes art section explains. That’s a political phrase with a long and troubling history — just ask Ministry — but that’s for another article. Still, all these superheroes, save Wonder Woman, received more clothing and armor and less-obvious underwear in their newly rebooted costumes. 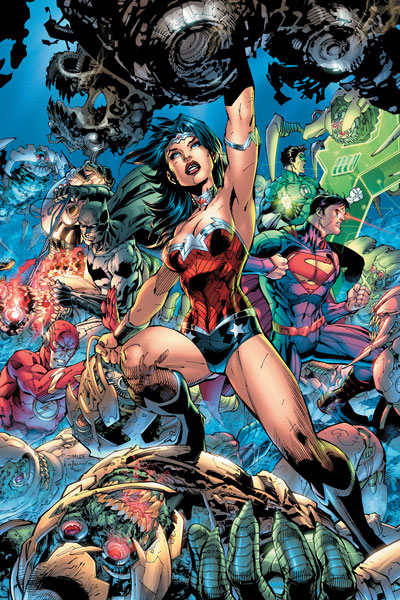 Meanwhile, Wonder Woman, whose last costume change featured long pants and a ridiculous leather jacket, wears even less clothes along with her new insignia choker, which is not only patently ludicrous but really unnecessary.

(Didn’t you learn anything by not listening to us when we told you how to make a Wonder Woman television show that doesn’t suck as bad as David E. Kelley’s heinous pilot, which was smothered in its crib by NBC?)

Cyborg, Not a Token

Pulling Cyborg, one of DC Comics’ earliest African-American superheroes, out of the Teen Titans and into the Justice League nexus is a smooth move, because the supergroup sure could use some color. Sure, he didn’t really arrive in the DC Universe until 1980, but better late than never.

Cyborg spent his 20th-century origin story as his scientist parents’ test subject, who would much rather pursue athletics. So having Johns purportedly reboot him in the 21st century as a star athlete with daddy issues isn’t so much a stretch as a yawn. Aim higher, DC: You’ve got one African-American on the Justice League squad, who can play football like no one’s business, and one woman who’s mostly naked next to a bunch of male paragons in armor up to their necks. Do you see where I’m going with this?

The greatest takeaway from The New 52’s first release is that the publisher’s future could be filled with more cosmetic tweaks masquerading as total makeovers. And that’s not a lock: Grant Morrison’s Action Comics run on Superman, Gail Simone’s run on Batgirl, Jeff Lemire’s run on Animal Man and Paul Cornell’s run on Stormwatch and Demon Knights sound like they are going to be awesome.

The Justice League’s debut issue illustrates that narrative and philosophical ambition, which the publisher has championed for decades, might take a backseat to the much cheaper thrills and dialog that have turned print comics from pop-cultural powerhouses into minor-league storyboard warehouses for blockbuster films, which is what this issue feels like.

Perhaps, as DC’s previously greatest writer, Alan Moore, told Wired.com in July, comics’ increasingly aging demographic is really dying out. Maybe turning the Justice League from immortal paragons into brash punks is the only way to capture the minds of a newer, younger generation raised on self-absorbed reality television and perpetual wars on terror, drugs and other things you just can’t kill off with skyrocketing militarism. But for how long?