Psst. Do you like awkward-yet-charming adults relegated to the halls of community college and their nonstop banter? 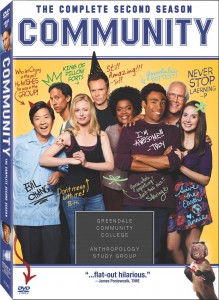 Today could be your lucky day. Wired.com is giving away three copies of Community: The Complete Second Season, released Tuesday. The four-disc, 24-episode set compiling Season 2 of NBC’s geek-tastic comedy retails for $46 but you could get it free.

Laugh at cameos by Betty White and Hilary Duff! Chortle at Troy’s ridiculous Halloween costume (as seen in the clip above)! Guffaw at Dean Pelton’s also ridiculous non-Halloween costumes! Get a glimpse of Underwire fave and Another Earth star Brit Marling on an accidental lesbian date! It’s all here.

To enter, simply send an e-mail to the address underwirecontests [@] gmail.com with the subject line “Community” and we’ll pick three random winners. Entries must be received by 12:01 a.m. Pacific on Sept. 13, 2011.

We won’t even make you win a paintball battle against us to win.