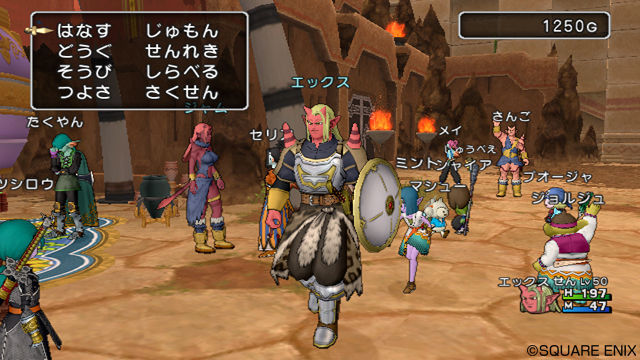 The Dragon Quest series of role-playing games has long been a bulwark of tradition in its native Japan. While other game series have evolved far beyond their original scope or disappeared entirely, Dragon Quest has stuck with its original, simple RPG formula ever since 1986. It has never gone out of style, selling millions of copies every time a new edition gets released.

That’s why gamers were shocked Monday morning to hear Square Enix’s plans for the next installment of the series. It was long known that Dragon Quest X would be released for Nintendo’s Wii. What no one could have predicted was that it would be an online game, one with massively multiplayer elements and an as-yet-undetermined monthly service fee. The Wii version will be released in Japan in 2012, with an upgraded version for Nintendo’s new Wii U console following later.

Has Dragon Quest finally jumped the shark, or will this end up being hailed as a shot in the arm that keeps the series from going downhill?

Game|Life writers Chris Kohler and Jason Schreier have come to different conclusions. Read on for Schreier’s reasons why Dragon Quest X Online is a colossally dumb move, and Kohler’s take on why it might just work.

Everything seems to be going downhill for the Japanese development side of Square Enix. The Final Fantasy and Dragon Quest maker’s recent releases have valued flash over substance. The company is more concerned with remakes and spinoffs than original ideas, and recent Square Enix RPGs like The Last Remnant and Final Fantasy XIII have not been received well.

Dragon Quest X Online may be the pinnacle of Square Enix’s ineptitude, an idea so dumb that it dropped the company’s stock by more than 10 percent. Here’s why Dragon Quest X could be a terrible disaster for the former king of all things RPG.

The developer is already reeling from the failure of Final Fantasy XIV, the MMORPG it released last fall to disappointing reviews. Square Enix had to shuffle around some numbers after that, cutting its profit forecast by 91 percent in a quarterly report last December. The company even apologized for FFXIV’s mediocrity.

Final Fantasy XIV still isn’t up to snuff — in fact, the game is treading water in an indefinite free-to-play trial period that Square Enix implemented in response to player complaints. So why would anybody think it’d be a good idea to work on another MMO? Shouldn’t Square Enix be focusing on fixing the critical flaws in its last one?

Granted, Square Enix is a very big company and development on Dragon Quest X is likely being handled by an entirely different team than FFXIV. But the 14th Final Fantasy has left a very bad taste in many gamers’ mouths, a taste that even Dragon Quest might not be pungent enough to wash out.

Level-5, the small Japanese developer responsible for Dragon Quest VIII and Dragon Quest IX among other titles, appears to have no involvement with the series’ 10th installment. This is unfortunate, because the Professor Layton creator has done a phenomenal job with the series so far, delivering two charming games that have been both commercially and critically successful. Square Enix’s track record isn’t nearly as hot.

If you’ve tried to play Super Smash Bros. Brawl or any other online Wii games, you’ve likely experienced all sorts of critical problems, ranging from serious lag to random disconnections. Nintendo’s online gaming has not exactly been top-notch, and though the company has promised to make some significant structural changes for its upcoming Wii U console, it’s hard to imagine playing a persistent online game on the Wii as it stands right now.

Will the Wii U’s tablet controller facilitate turn-based, online gameplay? How will friend codes play into the game? Will digital distribution be an option?

While it’s certainly possible that the game could work smoothly on the Wii and Wii U, the thought of playing an online game on one of Nintendo’s consoles is enough to give most Wii owners a serious headache.

Dragon Quest is the old gray lady of the gaming industry, maintaining tradition no matter how much the world changes. In many ways, last year’s Dragon Quest IX is a prettier version of the first Dragon Quest, released 25 years ago.

Interestingly, Dragon Quest IX was originally slated to be an action-based RPG until the development team switched course and made it turn-based like its predecessors, fearing fan backlash and outrage. So it’s tough to imagine Dragon Quest–obsessed Japanese gamers taking kindly to such a drastic directional shift this time.

Series creator Yuji Horii told me in a phone interview once that Dragon Quest V was his favorite installment because of its emotional impact. How can an online game, where the narrative centers on player interactions rather than scripted stories, capture the feelings Horii — and other Dragon Quest fans — enjoy so much?

I think Dragon Quest X will do well in Japan. The series is too ginormous there for any of its games to flop.

But I don’t think it will get any traction outside Japan, so I can’t imagine it coming close to Final Fantasy XI’s subscription numbers, which have hovered between 500,000 and 2 million since its release in 2003. Like most RPG fans, I’ll just twiddle my thumbs and do what I do every time Square Enix announces a Final Fantasy MMO — skip it and wait for the next one. –Jason Schreier

Next: Chris Kohler on why Dragon Quest X Online just might work.

Read 3468 times
Published in News Technologique-Tech News
More in this category: « Giveaway: Win a DVD of Community, Season 2 Elite Splits Call of Duty Players Into Haves, Have-Nots »
back to top