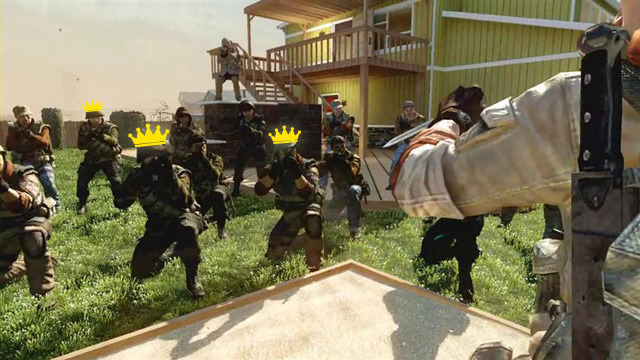 Last weekend, the hardest of the hardcore descended upon Los Angeles to take part in Call of Duty XP, a convention celebrating everything Call of Duty. Each attendee paid $150 for their ticket—but it’s hard to quibble over the cost of the ticket when 100 percent of the proceeds went to a charity that supports veterans—and the closing concert featured Kanye West. A new Modern Warfare 3-themed Xbox 360 was shown, highlighting Microsoft’s dominance in Activision’s world.

The full details surrounding the for-pay Call of Duty: Elite were also announced, and it feels like the series has hit its turning point: Activision is beginning to ratchet up how much you’ll need to pay to continue to be competitive. If you thought a yearly release was excessive, this may cause you to yearn for the days when you only had to pay $60 for the game each year.

Everyone will be able to access some of the social features of Call of Duty: Elite, but to take advantage of everything the service has to offer you’ll need to pay for a $50 yearly subscription. Or you can buy the Hardened Edition of Modern Warfare 3, which will gave you the game, a year’s subscription to the service, and a lifetime “founder” status for your account.

Activision is estimating there will be a jaw-dropping 20 pieces of downloadable content released after the game’s launch, and Elite members who pay for the service will get them all. The content will be released monthly for members, instead of the quarterly releases we’re used to. There is some audacity here: Activision thinks they can make a selling point out of paying for content first, before the rest of its fan base is allowed to buy it à la carte. Keep in mind this content is being sold to you sight unseen as of publication. You’ll see this argument in many stories about the service; since you’re paying less for the content if you’re subscribing, it’s a good deal. That’s assuming you’re the fan that already knew you were going to buy 20 pieces of content for the game you just paid $60 or more to play.

There will also be celebrity-fueled video content for subscribers, and a number of features for clans that will add more hooks for players who are competitive. This is where things start to fall apart: you may not have to pay for Elite to play Modern Warfare 3, but you’re quickly going to become a second-class citizen if you don’t.

Since premium subscribers will be getting the maps and other content before the rest of the community is able to buy it, nonsubscribers are going to be walking into content that the hardcore players have been practicing and mastering for days, if not weeks. It’s going to be a bloodbath. There will be no moments of learning the new maps and modes along with the rest of the community; you’re going to be going up against pros who know all the good hiding spots and tactical positions from your very first session until your last. Unless, of course, you’re willing to pay to get the content early.

Clan support will also be beefed up, with premium clan features that allow your clan to level up as well as your character, and to unlock items and features specific to your clan. Your clan could earn its own double-XP weekend, and of course you’ll be able to compete against other clans and test your mettle. Both players and clans can take part in competitive matches for real-world prizes, and Activision promises these matches will be refereed by actual people, and open to players of all skill levels.

Activision is creaing a lower class of gamers that will have to work much harder to compete online.

If you want to be a part of a competitive clan, every member will have to pay, or else you’ll be playing against other clans that get a head start on maps you can’t access, and have the leveling advantage of XP bonuses you won’t be offered. You could fight these advantages by setting up your own matches against other clans that aren’t willing to pay for Elite, and that will bifurcate the community. There will be those that pay for the service who have a very real advantage playing online, and everyone else.

Activision has a strong financial incentive to give premium subscribers as many advantages and bonuses as possible, and by increasing the amount of content released after the game’s launch and limiting when the regular players are allowed to pay for content, it can create a lower class of gamers that will have to work much harder to compete online. The $15 map packs were a massive success for Activision, but it’s clear gamers are willing to pay for more, and Activision is going to take advantage of that.

For serious players, it’s going to be hard to not pay for Elite if they’d like to keep up with the online community, and the constant drip of content and tips from the pros that will be included with Elite will make the players paying for the service even more effective at killing those that don’t. We complained about $15 map packs, which sold by the millions, and now we have Elite. If Elite proves to be a success, I’m scared about what we’ll be asked to pay for next year. Now that the players are going to be split between those who pay for Elite and those that don’t, there is no reason to develop new features for non-paying customers.

Welcome to the future.