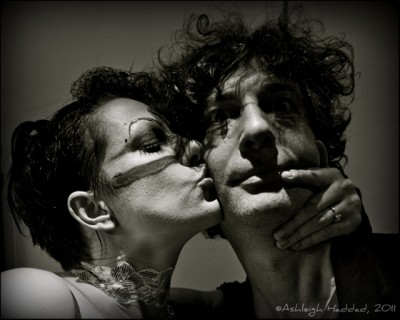 Who didn’t see this coming?

Following on the heels of their legally nonbinding flash mob wedding last November and very public lovefest on Twitter ever since, Gaiman and Palmer are taking their domestic and creative union to the West Coast this fall with a short tour, kicking off on Halloween in Los Angeles.

It already boasts a complementary Kickstarter project that has grabbed more than $70,000 in funding in just a few days, with weeks to go.

“This show will be very different beast from the loud, crazed rock shows that I’m accustomed to…and also very different from the relatively well-behaved readings to which Neil is accustomed,” Palmer said in a press release. “This tour is a like one big, long reception in which our two fan-families get to meet each other.”

Gaiman, for his part, is just hoping everyone will get along.

“I’m hoping that Amanda’s fans will put up with the messy-haired Englishman reading them stories, and that mine will enjoy the beautiful lady signing them songs of angst, post-modernism and woe,” said Gaiman. “Or possibly vice versa.”

Other than the newlyweds, the stage will host a piano, ukelele, and two microphones. There will also be some comfy chairs with access to Twitter, enabling the pop-culture heroes to access their hordes of fans online. Kickstarter contributors can purchase VIP seating and access to the sound check, as well as audio and arty merchandise from the tour. Geeks, start your support engines.