Can Bird Poop Crack a Windshield? 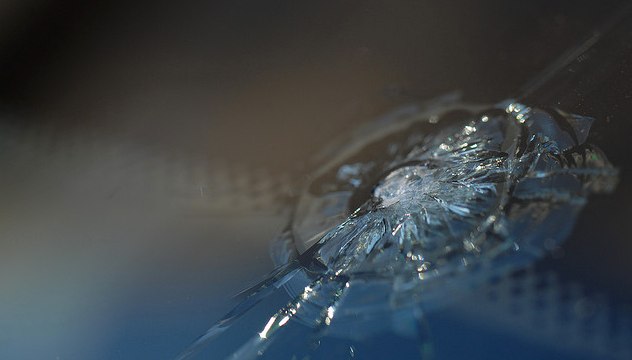 This was actually an informal request by Car Talk. A woman called in to say that she believes the windshield on her parked car was cracked from falling bird poop. Is this possible? Who knows, but we can make some estimations. If you would like to listen to this actual segment, here is the link to the Car Talk clip.

What starting info do I have?

That is about all I have. So maybe I can make some assumptions:

What is compressive strength? This is the maximum pressure the material can take before something bad happens. Bad in this case could be a crack, or deformation.

Are you getting tired of me saying “poop”? That is my preferred word for the bird bomb. Ok, so how big would this be? If the poop is spread out in a circle of 4 inches (radius of 0.05 meter), I need to guess at the depth of this circle (really, it is a cylinder). Suppose the poop is 2 mm deep after impact (let me call this h). The total volume of poop on the windshield should be the same as the spherical falling poop. Let me call the radius of the poop on the windshield R and the radius of the falling sphere, r. This means: 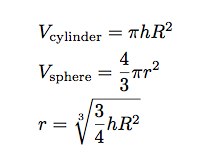 So, the poop is spherical and falling. Here is a force diagram of some falling poop (at terminal speed). 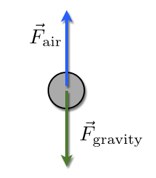 If the poop is at terminal speed (and thus a constant speed), then the magnitudes of these two forces must be equal. The gravitational force would be mg, where g is the local gravitational field.

The magnitude of the air resistance force can be modeled as:

Where ? is the density of the air (not the poop), A is the cross sectional area, and C is the drag coefficient (0.47 for a sphere). Using this, I can solve for the velocity. I get: 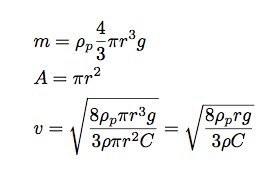 The Collision With the Glass

This is the difficult part. I need to estimate the force and pressure on the glass during the collision. Let me make a diagram of the colliding poop (on horizontal glass for simplicity). 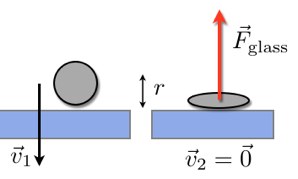 So here, the poop is moving down with a speed v1 right before it hits the glass. While it is stopping, I will assume the center of mass of the poop moves a distance r (I just picked that to make things easier). Also, during this stopping time, there is a force the glass exerts on the poop (and the poop exerts the same force on the glass). I have left off the gravitational force with the assumption that it will be small compared to the glass force. Also, I am just going to be solving for the average force during this time.

To estimate the value of this force, I will use the work-energy principle. It says that the work done on the poop is equal to its change in kinetic energy. I can write that as:

The work done by the glass is negative since the force is in the opposite direction the poop is moving. So, using a displacement of r and a final speed of zero, this gives:

Using the terminal speed of 26.8 m/s and a radius of 0.0155 meters, I get an average force of 363 Newtons. However, I am really interested in the maximum force. Suppose the force as a function of displacement looks something like this: 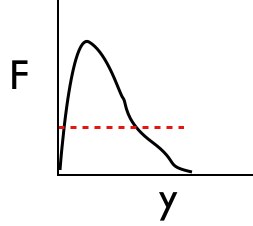 The red dotted line represents the average force (what I solved for above). The maximum force could be significantly higher. Let me just pretend that the maximum force for this case is 1000 Newtons.

Now what about the pressure? The problem is that the area of contact between the poop and the glass changes as it collides. Also, I really need the contact area when the force is maximum. Suppose that at this time, the poop makes a contact circle with a radius of 0.01 meters? This would make the pressure on the glass:

In case you didn’t notice, 3 MPa is less than 50 MPa for the compressive strength of laminate glass. But all is not lost. This is just an estimate. What if there was a small rock embedded in the poop? This could decrease the contact circle to a radius of perhaps 0.001 meters. Such a small contact area could cause the pressure to go up to 318 MPa.

I am leaning towards “possible”. If you bird had a poop that big and was dropped from a significant height and perhaps had some debris in the poop, then it could possibly crack a windshield. Should you worry about this threat? I don’t think so. Or just park under tree.

Sometimes I am not very quick with responses to comments. Sorry about that. So, here are some comments that might be asked along with my responses.