Zombies, Run! is a mobile app designed to encourage runners to step up their game through a story-driven transmedia adventure that sends players on a race to collect supplies after a zombie apocalypse. In its first week on Kickstarter, Zombies, Run! secured over $30,000 from more than a thousand backers looking to add some excitement to their workout routine. 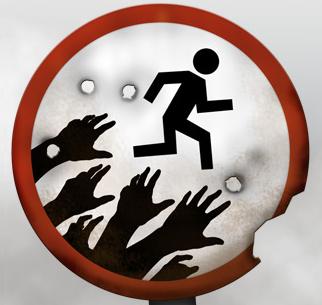 Six to Start have recently introduced their latest independent game, Zombies, Run!, and it has taken only days to reach the desired amount of pledges on Kickstarter to develop it by the first quarter of 2012. It is easy to see what has gotten gamers, runners and zombie aficionados so excited.

Zombies, Run! is a running game and interactive audio adventure which takes place during a zombie apocalypse. The game mechanics are fairly simple. The player assumes the role of the zombie survivalist known as “Runner 5? by going for a run with their smartphone and a pair of headphones. As players run, they collect items that are vital for the survival of their community.  Their base grows thanks to the player allocating resources where they are needed most. And as it grows, more content will be unlocked. The running missions are an integral part of a transmedia storyline which unfolds through the orders and voice recordings heard while running, and also through puzzles, websites and documents that players can uncover online once they have safely returned home. As an exercise aid, the game also keeps track of more traditional running metrics such as distance covered and calories burned.

What makes this game stand out from other offerings that encourage running or exercising is the strong undercurrent of story-driven gameplay. More than merely running from zombies, players are challenged to uncover the causes of the apocalypse: co-creator Naomi Alderman also teases in the game’s trailer that “there may be something dark and sinister going on other than the zombies.” One of the commenters on Kickstarter, Jamie Dunston,  echoes my own sentiments on the matter when she notes:

I hate to run. Despise it. In fact, I have often told my friends, “if you ever see me running, you’d better join in, because there’s something fast and deadly not far behind.” This game encapsulates that idea perfectly, and it sounds like such a challenge and adventure that even a hopelessly out-of-shape gamergirl like me can’t resist.

Rather than focusing on competing with others or oneself, Zombies, Run! taps into other sources of motivation such as cooperation, strategy, epic world-saving, and curiosity.

Unlike many locative games that require players to be in specific real-world places or play during a specific time period, Zombies, Run! can be played anywhere and at any time. Players run (or even walk) a route of their own choosing and can start and stop playing whenever they like. Content is set to expand as the game is developed further, with comments on Kickstarter and Twitter suggesting game enhancements such as a multiplayer mode and cycling missions.

A $10 pledge on Kickstarter guarantees donors access to all of season 1’s content on the iPhone, iPod Touch, or Android device, a discounted rate over the intended $20+ price point. So be sure to secure your place among the survivors by the end of the Kickstarter campaign on Monday, October 10th.