In Drive, Deep Character Fuels Thrill of the Car Chase 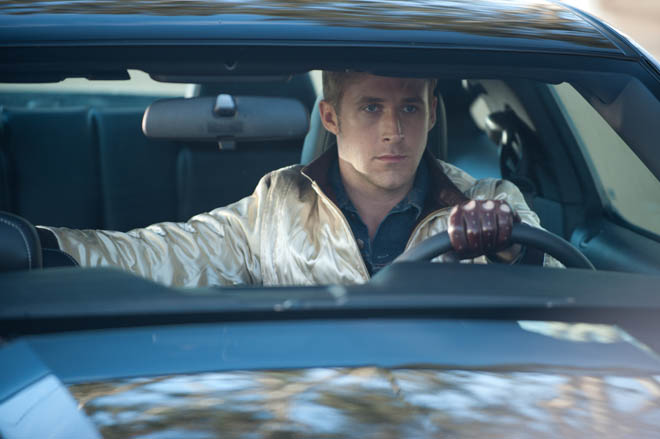 Word of caution: Do not, repeat do not, race down the highway on your way home from seeing Drive. The craving for a turbo-charged adrenaline rush becomes infectious after spending a couple hours watching the riveting car chases orchestrated by director Nicolas Winding Refn.

His rubber-squealing slice of L.A. noir deserves a reserved parking slot alongside Ronin, Bullitt, The French Connection and a handful of other action films that left skid marks on cinematic history.

Taking a cue from those movies, Refn groks the key to success: Car chases become a hell of a lot more compelling when you actually care about the person behind the wheel.

The Danish filmmaker won Best Director at the Cannes Film Festival’s in May with Drive for proving that white-knuckle thrills, high-end cinematography and three-dimensional characters can actually co-exist in the same movie.

Gosling’s stunt driver/mechanic/wheelman-for-hire Driver is not much for conversation. Whether on a film shoot or moonlighting in the driver’s seat of a bank robber’s getaway car, he remains taciturn. How long has he been in Los Angeles? “A while.” Would he like a glass of water? “OK.”

But his automobile choices speak volumes. For one heist, he picks a plain vanilla Chevy Impala so he can pass unnoticed through the streets of Los Angeles. The catch: It’s got a powerful engine under the hood. Likewise, the Driver’s bland personal exterior sheathes a frightening amount of nerve and, as the story develops, considerable heart.

After he meets Irene, the Driver idles through entire scenes using mainly simple gestures, facial flickers, long pauses and lingering eye contact. Gosling’s loner gradually warms up as he watches cartoons with Irene’s endearing young son (Kaden Leos) and flashes his first grin during a joy ride with mother and son through a bone-dry concrete culvert known in Los Angeles as a “river.”

Drive comments tangentially on Hollywood’s long history of pointless car crashes in one sequence. For his day job, Gosling shows up on a movie set to do a “rollover.” Dressed as a cop, he executes the maneuver as instructed and in two seconds, the car rests on its hood.

No muss, no fuss, who cares?

But during Drive’s third act, car meaningfully mirrors character development when Gosling’s character powers up to pursue a brutal thug in his mighty Malibu. Muscle car matches motivation as the formerly passive Driver finally gets fired up.

While Drive hurls its hero into a fictitious snake pit of larcenous Los Angeles felons, terrific documentary Senna, which premiered in Japan last year and is currently in limited release in the United States, achieves similarly cathartic results with archival footage portraying the life of a Formula One driver who died in a 1994 car crash.

Director Asif Kapadia reveals Brazilian driver Ayrton Senna as someone who loved racing but had no patience for bureaucratic bullshit. Unlike longtime rival Alain Prost, a French driver favored by the officials that controlled competition rules, Senna ran afoul of administrators and spoke out against life-endangering regulations.

As Senna readies for what will be his final race, he grieves for a buddy killed during trial runs a day earlier. The camera rolls in eerie silence for several minutes as Senna’s face communicates anguish about past tragedies and future fears. When the race begins, Senna’s car-cams capture the blurred scenery.

We already know the outcome, but it’s no longer just about cars zipping around a track: The man in the cockpit, torn between integrity, self-preservation and a fierce will to win, matters more than anything.

There’s nothing wrong, really, with bantering dudes and slow-motion spectacle — witness the Fast and Furious franchise or The Italian Job’s inventive show-stopper composed of Mini Coopers ripping through subways.

But for audiences that have seen hundreds, if not thousands, of big-screen car crashes, films like Drive and Senna transcend the lure of rubbernecking voyeurism by generating genuine interest in the people behind the wheel.

In the best car chase movies, as in life, how you drive is who you are.

TIRED Aerial nighttime views of Los Angeles? Been there, done that.

Read 4543 times
Published in News Technologique-Tech News
More in this category: « Mobile App Provides Workout for Zombie Apocalypse In Japan, Microsoft Struggles to Connect With Kinect »
back to top