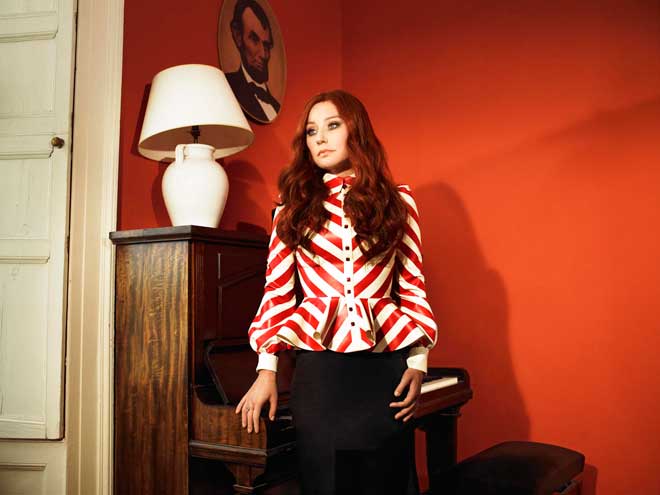 Tori Amos’ music has always sounded like it came from another time — be it the Baroque period or a discordant future as yet unseen. Not being a part of trends is what’s kept the songwriter consistently sounding new. In her latest surprising turn, she’s transformed an attempt to re-create a centuries-old composition style into one of the most productive periods of her career.

Not only does the prolific pianist have a new album — Night of Hunters — that is a 21st-century interpretation of a traditional song cycle based entirely on classical themes, she’s also completing the compositions for a musical set to debut next year at Britain’s National Theatre.

Amos was up to the challenges. Night of Hunters is the result of her new collaboration with classical imprint Deutsche Grammophon. When the label approached her about doing a song cycle, she was intrigued, but wondered what the catch was.

Musicologist Alexander Berg told her the cycle had to be based on classical themes. Amos was intimidated (her response to Berg was “OK…. I need a shrink”), but she did it anyway.

“I looked at him and I said, ‘You know, it’s easy to get that thing wrong. And if you get it wrong, it’s worse than tripping on your Louboutins during Fashion Week in Paris,’” Amos said in an interview with Wired.com. “You can’t recover from something like this amongst your peers.”

To prepare herself to write the album, Amos had Berg send her reams of classical music. She then began pouring over the centuries-old compositions to figure out what clicked and what didn’t.

The result is Night of Hunters, due Sept. 20, a sweeping and beautiful musical narrative about a woman transforming herself after a failed relationship. The woman and her paramour cross the Atlantic from the New World to the Old World (Ireland, to be specific), where they break apart like so many waves on the shore.

With help from a Fire Muse (voiced by Amos’ niece) and a character named Annabelle (inspired by the Children of Lir from Irish mythology, and voiced amazingly by Amos’ 10-year-old daughter, Tash), the woman is reborn. By the album’s end, she vows to “Carry” (video above) her lost love with her.

“I thought that if Annabelle represented the duality of nature and was able to shape-shift from fox to goose, hunter to hunted, and show this woman a different perspective, I could jump in and out of Irish mythology, because I had a pivot point in her,” Amos said.

That kind of mystery and metaphor in music is what Amos is famous, and infamous, for. Since she arrived on the alternative music scene in 1992 with Little Earthquakes, her musical style has constantly evolved, pairing her prodigious piano skills with everything from rock to gospel to industrial and dance music and back again.

Through that time her records have done well, but never great — they break into the Billboard 200, but don’t reach No. 1; they’re Grammy-nominated, but don’t win. Never “blowing up” is probably why she’s succeeded and kept her fan base intact.

While Amos’ foray into classical song cycles probably won’t win over new mainstream supporters, it will please long-time fans and could introduce her to traditional classical audiences, and in turn introduce them to her unorthodox story style when it comes to lyrics (this is, after all, the woman who once sang, “Father Lucifer, you never looked so sane / You always did prefer the drizzle to the rain.”)

Finding new ways to work out stories through music seems to be the current state of Amos’ art. For the last five years, she’s been composing songs for a musical adaptation of George MacDonald’s 19th-century fairy tale “The Light Princess.” The musical is being directed by Marianne Elliott, who just won a Tony for her direction of the play War Horse, and is slated to premiere in spring 2012 at the National Theatre in London. It’s easily the biggest test Amos has ever subjected herself to.

“This [record] could never have happened if I hadn’t been doing the musical; that’s the key,” Amos said. “I must say though, I looked at Marianne just a couple weeks ago and she asked, ‘Is this the hardest thing you’ve ever done?’ And I said, ‘In any lifetime, even when I was a Roman.’”

‘[The director] asked, “Is this the hardest thing you’ve ever done?” And I said, “In any lifetime, even when I was a Roman.”‘

Now that it’s clear Amos can wrap her composer’s mind around telling tales, it begs the question, would she ever consider scoring a film?

Throughout the years, many of her songs have been used in movie soundtracks (Great Expectations, Higher Learning), but these days people like Trent Reznor are winning Oscars for scoring films. Would she give it a try?

“I haven’t been approached, and that’s OK,” Amos said. “In film, it seems to me like you have to follow a director’s vision and they may think they know a lot about music and actually know very little about it. I don’t know if I could do that. I don’t know if people want to hear that from musicians, much less women.”

But doing things that women aren’t “supposed” to do is something Amos does better than many females before her. At a time when women in music are thriving — predominantly in pop (Lady Gaga, Beyonce) — Amos is still making music while more than a handful of her Lilith Fair-era contemporaries are not (we’ll be believe in that new Fiona Apple record when we see it).

It’s no surprise to anyone, including Amos herself, that men traditionally have a longer shelf life in rock music than women.

“Men aging seems to be embraced in the entertainment industry because somehow they get sexier,” said Amos, 48. “You’d think as women get more older and intelligent that that’s sexy, because as we know, men that gain status or power, they become attractive to younger women, but as women gain status it’s, ‘Oh, she’s a wise old hag at the fire!’”

Yet, with an album coming out and a musical heading into production, it seems the pianist is breaking the very mold she described. What’s the secret?

“I’ve had to keep exploring different ways of presenting the music so I don’t repeat myself,” Amos said. “So people don’t say, ‘That’s exactly what she did 10 years ago.’”

Read 3995 times
Published in News Technologique-Tech News
More in this category: « Great Ape Navy's Newest Ship is the Pick-Up Truck of the Sea »
back to top