Navy's Newest Ship is the Pick-Up Truck of the Sea 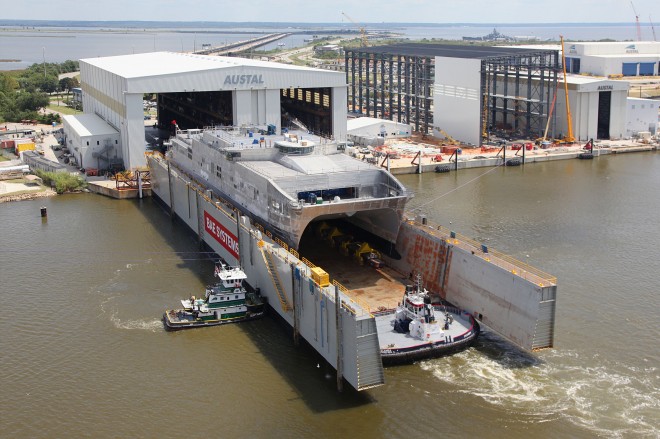 There’s not much inside the Navy’s newest ship, and that’s exactly how they like it.

“The vessel is in essence a large and fast maritime ‘truck,’” Eric Wertheim, author of the definitive Combat Fleets of the World, tells Danger Room. What she carries, and where, is left to the imagination of the Pentagon’s regional commanders. “Flexibility may the best attribute of this ship,” says Capt. Douglas D. Casavant, Jr., Spearhead’s first skipper.

Spearhead and the other 22 planned Joint High Speed Vessels (JHSV), built by Austal USA in a brand-new shipyard on Alabama’s Mobile River, are a product of the Pentagon’s recent obsession with “modular” vehicles. The idea is to build basic machines, fast and cheap, and quickly modify them with new weapons, sensors and other payloads. “Our 20,000-square-foot mission bay area be reconfigured to quickly adapt to whatever mission we are tasked with,” Cassavant says.

As a design philosophy, modularity doesn’t always work. The Littoral Combat Ship, a version of which is also built by Austal, ended up being built faster than its swappable weapons and sensors, leaving the $600-million warships mostly useless empty shells, for now. But empty could work for the JHSV; it’s focused on non-combat, logistics-style missions. In fact, the swift catamarans — with a top speed of 45 knots, compared to just 30 knots for most warships — will be crewed by civilian mariners from the Navy’s Military Sealift Command instead of combat-trained sailors.

Which non-combat missions the JHSV handles could vary widely. “It could be for getting U.S. assets into a disaster relief zone quickly, or it could be for getting friendly forces evacuated out of a war zone in an emergency, or for unloading Marines and soldiers into an austere port once it’s been secured by an initial assault,” Wertheim says. “It can also play an important role moving stuff from a remote staging base at sea to wherever it’s most needed ashore.”

And that’s not all. Special Forces could use the JHSVs as a fast, low-profile staging bases for secret raids into enemy territory, though the vessels’ civilian crews and light, strictly defensive armament means they can’t get too close to a hostile shore.

That is, if the Navy’s new pick-up truck ship can withstand the elements. Spearhead builder Austal recently caught flack for omitting a standard corrosion-protection system from a Littoral Combat Ship it built. That ship, USS Independence, began disintegrating after just a few months in the water. “The dirty little secret is that the Navy fully expects to have the same problems with the JHSV,” naval analyst Raymond Pritchett claims. Austal spokesman Craig Hooper declined to comment for this story.

Pritchett adds that the corrosion problem “is well understood, so a solution can be found.” Let’s hope so. It’d be a shame for the Navy’s new pick-up truck of the sea to rust away for lack of Tru-Kote.