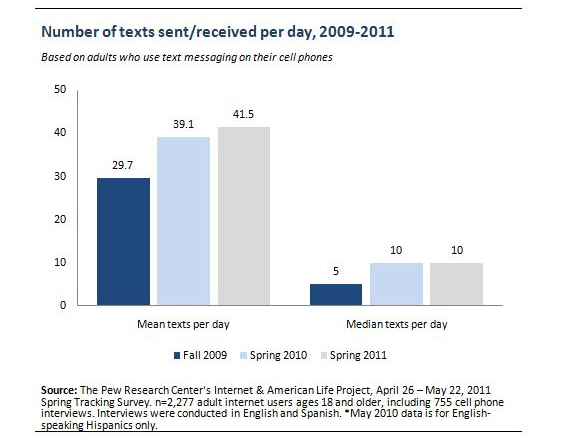 The average number of texts sent or received each day didn't change too much from 2010 to 2011. Image: Pew Internet

Teens text a lot. Old folks don’t. But in general, it looks like our obsession with texting is beginning to level off, according to the latest numbers.

Pew Internet found American cell phone owners sent an average of 41.5 text messages per day last spring and 73 percent of Americans with a cell phone used the texting function. That’s a big jump from 2009, when we sent an average of 29.7 texts daily, but only a tiny increase over the 39.1 sent last year.

Some other notable factoids from the study (which surveyed 2,277 adults age 18 or older):

Although the stats are interesting on their own, it’s the year-to-year change that’s most indicative of texting trends. It’s worth noting the change from 2010 to 2011 was tiny. Does this suggest we’ve hit our peak?

“I would suspect folks have found their natural level of texting,” says Aaron Smith, author of the Pew study. For those already texting a lot (some users text upwards of 3,000 messages a month), there’s only so much you can increase from there.

Alternatively, with the rising popularity of smartphones, are we simply turning to other options?

Smith says it’s too early to tell, but it could be a factor. There are many convenient apps and other alternatives that could be reducing our tendency to text.

Launching with iOS 5 is Apple’s possible text messaging killer: iMessage. When you send a text, iMessage will determine whether the recipient is running iOS 5. If so, iMessage will send the message using your data connection instead of SMS.

If all of your friends have iPhones, iOS 5 provides the option to shut off SMS completely (the opposite is also true — you can shut off iMessage and exclusively use SMS). It also will tell you whether the recipient has actually read the message, so you’ll know if they’re lying with that old, “Oh — I never got your text” line.

You don’t need to send a text if you and your friends are online. You can send an instant message instead, whether they’re mobile or on a computer. Several apps let you do this.

The Meebo app is a bit of a catch-all, allowing you to instant message contacts with Gchat, Facebook, AOL Instant Messenger or other IM clients.

imo.im also lets you consolidate your instant messaging and chatting sources into one app. It’s available for iOS, Android and BlackBerry users. You can use it with contacts from Skype, Facebook, Gchat, Yahoo Messenger, AIM and others.

Beejive is another option. It takes advantage of push notifications, so you get an SMS-like notification when someone has messaged you.

Skype’s mobile app is another option for messaging as well as making voice and video calls if you already have a subscription to Skype’s services. You can chat one-on-one, or have group chats.

Facebook has its own messaging app called Facebook Messenger that can be used to communicate with Facebook friends. The app, available on iOS and Android, is separate from the Facebook app. Facebook Messenger lets you send messages to contacts and send group messages. If your recipient is logged in to the app, they’ll receive it through there, otherwise they’ll receive it as an SMS message.

And if you’re on Android, you can take advantage of the official Gchatting app, Google Talk, so you can easily continue conversations when you switch from the desktop to your Android phone.

All of these SMS alternatives are arriving at an extremely opportune time.

AT&T recently “simplified” its texting plan. Subscribers can pay $20 monthly for an unlimited plan or pay 20 cents per text message. For the first time, if you’re a moderate to light texter, there’s no plan, like the former $10 a month 1,000 text message plan, catered for your needs (20 cents per message? Seriously? C’mon, that’s highway robbery).

With that in mind, using one of these options could not only be a good idea, it could be economical — especially if other carriers follow suit, which they often do. Just look at how fast the unlimited data plan died.

Our love affair with the text message may be on its way out.