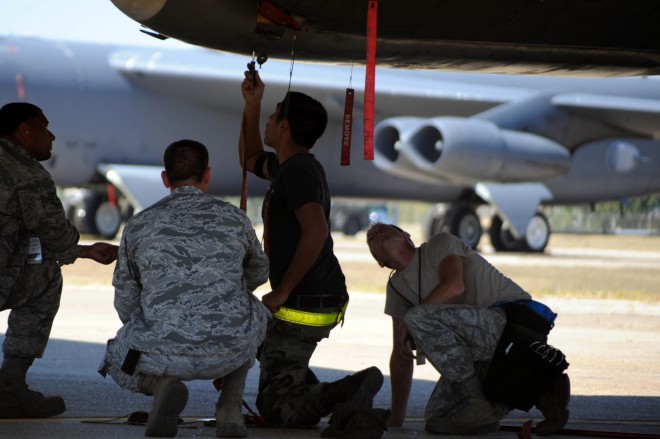 America’s nuclear bombers are supposed to be ready to go in a hurry. They’re subject to the strictest rules for loading and prepping aircraft with the world’s most dangerous weapons. So how did inspectors hand out a passing grade to wing of B-52s when it took them four attempts and 30 hours to get a single plane ready to fly?

The incident took place in September 2007, shortly after the U.S. Air Force suffered one of the most worrisome events in its history, when a military crew misplaced six nuclear-tipped cruise missiles for over a day. Eventually, more than 90 officers and airmen were relieved or reassigned after the incident. Both the Secretary and the Chief of Staff of the Air Force were fired. Nuclear bombers and missiles were all brought together under a single chain of command.

But in the immediate aftermath of the so-called “Bent Spear” incident, the reaction was something awfully close to ho-hum. Yes, Limited Nuclear Surety Inspections (LNSIs) were ordered for all nuclear units. But between August 2007 and April 2008, the Air Force handed out “Satisfactory” ratings for 20 out of 21 LNSIs — a figure that “would have been considered somewhat incredible even at the height of attention to the nuclear enterprise,” a Defense Science Board report (.pdf) later noted.

Perhaps the most curious passing grade was handed out to the 2nd Bomb Wing at Barksdale Air Force Base in Louisiana. The unit encountered “numerous maintenance equipment reliability issues” during its test, according to an inspection report (.pdf) obtained by the blog In From the Coldunder the Freedom of Information Act. Those problems included “six failed weapons load trailers, 5 failed power generators, power controller unit failure and 2 [Common Strategic Rotary Launcher] issues.”

On the fourth attempt, after 30 hours of trying, the wing finally managed to get a nuclear cruise missile “pylon” onto a single B-52 bomber.

Nuclear bombers are no longer required to take off in an instant; President George H.W. Bush took the plane off alert status in 1991. The job of instant nuclear retaliation is instead left up to America’s nuclear missile forces. Still, 30 hours is an awfully long time. And it’s not the only part of the report that stands out. Under “best practices,” inspectors marked “none.” Wing personnel also failed to ensure markings on some equipment “were applied or legible” beforehand.

Fortunately, things have changed since then. First, nuclear inspections started getting tougher. Unit after atomic unit began flunking its tests, for stuff a lot more picayune then failing to load a bomber. Commanders lost their jobs when their wings and squadrons couldn’t get their acts together.

Finally, in 2009 folks started to get the message: Nuclear weapons are all about deterring potential adversaries, so then those enemies need to know that those arms will always be ready to go, no matter what. Any imperfection, even a paperwork slip-up, “could result in an unsafe, unsure, unsecure or unreliable nuclear weapon system … one that could fail in peacetime and adversely affect credibility of the reliability of the system or fail if tasked to produce a nuclear yield,” Maj. Gen. Don Alston, who was installed in the Pentagon to oversee the Air Force’s nuclear forces, told Danger Room in a 2009 interview.

Read 3673 times
Published in News Technologique-Tech News
More in this category: « Text Messaging Habits Leveling Off, Alternatives Abound Childproof Your Smartphone or Tablet »
back to top