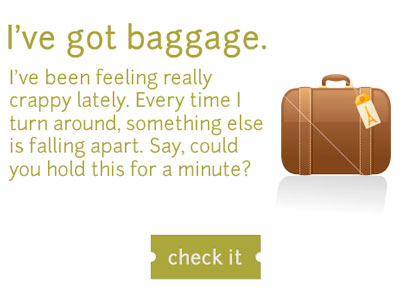 Life sucks, right? But music makes it better. That’s the worldview behind Emotional Bag Check — a site that lets you suggest songs to cheer people up.

It’s simple. Go to Emotional Bag Check, and choose whether you want to offload a problem or help out with someone else’s.

If you want to get something off your chest, all you need to do is type what the problem is, provide an e-mail address, and someone will read it and return a song they think is relevant along with (optionally) a message of support.

If everything’s going pretty well for you, and you just want to help other people out, then you’ll be confronted with someone’s problem and asked to pick a song that’ll make them feel better. Here, a sense of duty suddenly kicks in — you’ve got a direct line to someone’s heart, and you don’t want to waste it. You’ll find yourself taking a substantial amount of time to choose a song that’s just right for the situation, as if this person were a close friend.

We were confronted with a girl whose boyfriend was in Mexico and she was thinking about dropping out of university because she missed him so much. That proved problematic — not enough bands have written a song about how important a good education is to your career prospects (sort it out, bands). In the end, we settled on Hello Saferide’s “25 Days” — which is about missing someone, but sticking it out, along with a message about how if he’s that great, then he’s worth waiting for.

Once you’ve shared a song with someone, you get access to the stats, which show that among the most popular songs to be recommended are Jimmy Eat World, Coldplay, James Blunt and Maroon 5. The idea that someone might read through your deepest, darkest problems and think that “You’re Beautiful” will be just the ticket to cheer you up is a little depressing.

Nonetheless, the Grooveshark-powered site is strangely compulsive. By mashing up Post Secret with music, it’s likely that whoever’s behind the site (there’s no information provided) might well have a hit on their hands.

Update 17:02 21/09/2011: We’ve managed to track down the person behind the site — Emotional Bag Check was built by Robyn Overstreet, a web developer and teacher from New York. Here’s a quick Q&A with Overstreet about the service.

Wired.co.uk: What gave you the idea for Emotional Bag Check?

Robyn Overstreet: The inspiration to build the site came when I thought “emotional bag(gage) check” would be a great domain name. I was sure it was taken. When I found that it was available, I decided I needed to make something with it.

Wired.co.uk: What are some of the most interesting things you’ve seen submitted to the site?

Overstreet: One thing that kind of surprises me is that as the site began getting visitors, most of the posts I saw seemed to be from teens. I’m not sure how it got to that community, but they’ve been really active. Also, I’m heartened by how personal people are willing to be, and how detailed. Even with a few sentences, many people are able to convey a story about what’s going on for them.

Wired.co.uk: Have you ever submitted anything to the site? What kind of response did you get?

Overstreet: Yes, of course! I submitted more when I was just getting the site off the ground, though. I got several songs I’d never heard before, which was great. I also got some kind words.

Wired.co.uk: The site is very compulsive — you feel a strong connection to the person you’re advising, or who advises you. To what extent do you think this is down to the use of music, rather than straight advice?

Overstreet: Hmm. I think maybe having to think of a song gives a context, a jumping-off point for giving someone advice or support. You’re not required to write anything along with the song you send, but trying to think of the perfect song gives you a chance to reflect on the person’s situation.

Wired.co.uk: Why did you pick Grooveshark to power it, over, say YouTube?

Overstreet: I picked Grooveshark largely because of their TinySong API — it is simple and has great search functionality. Also, Grooveshark gives songs a URL, which is something like Pandora doesn’t do. I did consider YouTube but that seemed like it would dilute the experience a little. I wanted the focus to be on songs. To keep it simple.