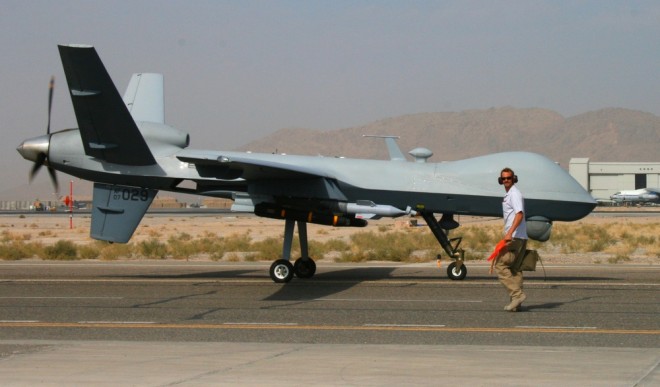 Washington is quietly setting up at last two new East African drone bases, plus one on the Arabian Peninsula, to support the expanding U.S. shadow war against Islamic militants in Somalia and Yemen. An apparently new facility has been built in Ethiopia. In the island nation of Seychelles, a defunct airfield is being reactivated. A third base is being set up in or near Yemen.

The news, first reported by The Washington Post and The Wall Street Journal, should come as no surprise to close observers of the America’s shadow war on the borders of the Indian Ocean. But the base expansion could be met with outrage by the people most directly affected, especially Africans themselves. For years, Washington has insisted that it wouldn’t build new bases in Africa.

The new drone facilities are a small step for a Pentagon and CIA already heavily invested in the Indian Ocean region. While mercenaries and U.S. allies — “proxies” — do most of the fighting in Somalia and Yemen, American warships, aircraft and special operations forces also play an important role. U.S. Reaper or Predator drones have struck militants in Yemen at least six times total in 2010 and 2011. In Somalia, drones have attacked at least twice since 2007. U.S. forces have also hit Somalia’s al-Shabab Islamic group a total of six times, that we know of, using cruise missiles and Special Forces helicopters.

The American base in the tiny country of Djibouti, north of Somalia, provides food and fuel to the warships and serves as a launching pad for the unmanned vehicles and choppers. The Djibouti base has been around since 2001. U.S. Special Forces operated from a small base in Kenya beginning “a few years” prior to 2007, according to military consultant Tom Barnett. American commandos also launched attacks from an unspecified Ethiopian location in early 2007. The Seychelles drone base was open for business in 2009 and 2010 before temporarily shutting down.

Amid all this activity, Washington insisted it had no plans for new African bases. “I want to dispel the notion that all of a sudden America is, you know, bringing all kinds of military to Africa. It’s just simply not true,” then-President George W. Bush told reporters in Ghana in 2008. Bush was trying to reassure African audiences that the new U.S. Africa Command would not mean an expanded U.S. military presence in Africa. Africa Command kept its headquarters in Germany, but the U.S. presence expanded anyways — though many of the forces operate outside of Africa Command’s purview.

For Washington, the rationale for new bases is clear. “We do not know enough about the leaders of the Al Qaeda affiliates in Africa,” a senior U.S. official told The Wall Street Journal. “Is there a guy out there saying, ‘I am the future of Al Qaeda’? Who is the next Osama bin Laden?” If finding and killing the next bin Laden means breaking a promise over African bases, the U.S. seems content with going back on its word.