Warco: An FPS Where You Hold a Camera Instead of a Gun 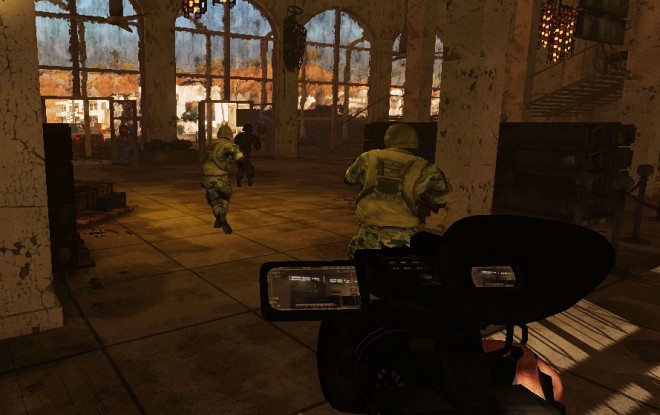 Warco is a first-person game where players shoot footage instead of a gun. A work in progress at Brisbane, Australia-based studio Defiant Development, the game is a collaboration of sorts; Defiant is working with both a journalist and a filmmaker to create a game that puts you in the role of a journalist embedded in a warzone. Ars spoke with Defiant’s Morgan Jaffit to learn more about this political game disguised as an FPS.

The game was actually the brainchild of someone outside of the studio. Tony Maniaty, an Australian journalist who has reported from regions like East Timor and post-Soviet Eastern Europe, envisioned the game as a sort of training simulator.

He then began working on the project with filmmaker Robert Connolly, who directed the film Balibo, a political thriller about the deaths of Australian journalists during the conflict in East Timor in 1975. Eventually Jaffit and Defiant were brought into the project.

“It’s been a great partnership, with Tony giving the game a great grounding in the real world issues of war journalism, Robert lending his structural and cinematic eye, and Defiant helping to channel that into something that’s interactive and engaging,” Jaffit told Ars.

“It offers a new perspective on a familiar theme, which enables us to use the tools and techniques of other FPSes to build a completely different kind of narrative and experience. From a design perspective, that’s what excited me.”

The game itself — the title of which is actually short for “war correspondent” — follows the story of journalist Jesse DeMarco. Players will experience the process of filming conflicts, going into dangerous situations armed with nothing but a camera. They will then edit the footage into a compelling news story. The scenarios range from intense bursts of action to quieter moments as you discuss the events of the day with fellow journalists in a hotel. Though the main mechanic will be filming the action, Warco is also very much about choice.

Warco is ‘about navigating through a morally gray world and making decisions that have human impact.’

“It’s also about navigating through a morally gray world and making decisions that have human impact,” he explained. “It’s about finding the story you want to tell, as each of our environments is filled with different story elements you can film and combine in your own ways. It’s both a storytelling engine and an action adventure with a new perspective.”

The scenarios are designed to mirror the recent tumultuous events in the Middle East and North Africa, in situations cribbed from Maniaty’s real-world experiences in the field.

A game that looks a lot like a first-person shooter but doesn’t actually allow players to fire any bullets could potentially be difficult to market, and one unnamed publisher recently told the studio that “it’s a hard sell to executives to suggest an FPS with no shooting, but this is definitely the sort of game we should be making, as an industry.”

Warco has been in development for four months and Defiant is currently in talks with several publishers to try and bring the game to a wide audience. When that will actually happen, and on what platforms, hasn’t yet been determined.

“We’re optimistic that we’ll find a way to make the project work as a commercial reality,” Jaffit said.