When it benefits them, chimpanzees willingly work together. Otherwise, they can’t be bothered.

For humans, collaboration is rewarding for its own sake, a behavioral split that may underlie key differences between human and chimpanzee societies.

Primate researchers, working with semi-free ranging chimpanzees at a sanctuary in Uganda, found chimpanzees recruit a helping partner only if it gets them more food than they’d get alone. The study, described in Animal Behavior, Sept. 7, is part of a current trend in primatology to unpick how motivation and mental state affects an animal’s interactions.

“It looks like motivation plays a very important role in how we behave,” said Anke Bullinger, primary author. “And it gives a hint that even though species might be cognitively capable of doing certain things, they might not show the behavior, because they just don’t want to.”

The extent of human cooperation is unique, but not cooperation itself. Chimpanzees, bonobos, elephants, and many birds work together for joint rewards.

“The interesting thing is that there isn’t much research on the motivational aspects of this,” Bullinger said. “I suspect that motivation plays a role in many aspects of cognition, not just in cooperative behavior, but also in social learning, in communication.”

For the study, Bullinger and her colleagues set food boards out of the chimpanzee’s direct reach. To bring the banana-bearing platforms close, the chimps pulled on a rope resting on the ground. Chimpanzees had two options. One board they could pull close solo. On another board, loose rope threaded between loops. To get these boards, both ends had to be pulled, so the chimpanzee had to go get their partner, waiting in an adjoining room. 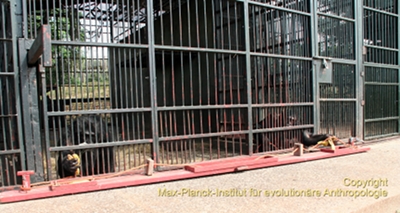 “We were a bit surprised that just one more piece made such a difference,” Bullinger said.

The study implies that chimpanzees view others as social tools, as a means of maximizing their own rewards.

If this represents a fundamental difference between humans and other animals, it could help explain why humans evolved to be better problem solvers, and use a wider range of habitats.

“If you have a species that is psychologically predisposed to work with others, and get them involved, that opens up possibilities,” Watts said. “There is a wider range of goals they can accomplish, the population can do much better ecologically and evolutionarily.”

How deep this social difference between humans and other primates runs isn’t certain. Primatologists aren’t sure, for example, if chimpanzees collaborate in the wild or, if they do, how much.

“We’re agnostic about hunting being a cooperative activity,” said Watts, who studies chimps in Uganda at the Ngogo field site, along with his colleague John Mitani, a primatologist at the University of Michigan.

“It is absolutely impossible to keep track of everything that is happening,” Watts said. “It could be that they are very effectively coordinating their behavior, but we just can’t see if that’s what they’re doing.”

Chimpanzees often hunt in large groups, 30 to 50, and move quickly through the forest. Watts is convinced that chimpanzees notice and predict the actions of others, that they play off each other and may appear to coordinate their actions. “But it’s probably a product of responding to others, not cooperation,” he said.

Many researchers are interested in studying how chimpanzees hunt because, for humans, group hunting probably underpinned formation of early societies, as we transitioned from individual to collaborative foraging.

While the chimpanzees in Bullinger’s experiment clearly understood how to collaborate, they likely viewed their partners as social tools, means to reach their own goals, the authors write. As a contrast, studies of children at play show they prefer to involve others, even when the game doesn’t require partner participation. Being social is its own reward, it seems. Bullinger and her co-authors suggest this points to “a major difference in the psychology underlying collaboration in chimpanzees compared to humans.”

For some researchers, this is too great a leap. Primatologist Victoria Horner, at Emory University, has worked with the same chimpanzees at Ngamba Island Sanctuary. Before drawing distinctions between human and chimpanzee motivation, she would like to see exactly comparable studies, requiring humans to collaborate over food, rather than games.

“It’s a really good chimpanzee study,” Horner said. “But I’m not so sure how we can apply this to what we know about humans.”

Read 1939 times
Published in News Technologique-Tech News
More in this category: « Debate Over Purpose of Bird-Egg Coloration Continues NASCAR Shops Ready to Trick Out Commandos' Rides »
back to top