Dark Side of the Moon Initiates Pink Floyd Immersion

There may not be a stranger question than “Why Pink Floyd?” The answer, after all, is in the question. But EMI is asking anyway as it throws open the foundational foursome’s vault to the pop-culture spotlight.

The embattled label signed a new five-year contract with Pink Floyd’s estranged surviving members in January. After the passing of keyboardist Richard Wright (above, right) in 2008, that membership now only includes guitarist David Gilmour and drummer Nick Mason (center), who have yet to fully reconcile with bassist and lyricist Roger Waters (left), who has nevertheless soldiered ahead with an impressive solo career.

Evidently, EMI feels that Generation Xbox needs to be reminded who exactly it was that triumphantly championed multimedia musical freakouts after blossoming in 1966 with visionary tripper Syd Barrett, who passed away in 2006 after decades of seclusion.

But who are we to correct them? These days, pop-cult reproduction functions like American Idol and Glee are erasing original artists with exponential accuracy. So maybe “Why Pink Floyd?” isn’t such a ludicrous hook after all.

“It’s sort of curious, because after years of releasing very specific records, this complete change-around of doing various versions is very odd,” Mason told Wired.com in a wide-ranging phone interview. (Click the top article in the sidebar on the left to read our conversation in its entirety.)

“It’s not something I think we would have done 15 years ago, but it seems like an exercise that is worthwhile,” he added. “And I know we’re not alone: There’s been almost a change of heart in the way that artists provide their history and working notes, so to speak.”

Pink Floyd n00bs who want to take an archival trip through the legendary band’s back data have several points of entry to choose from, including vinyl, digital, download, DVDs, Blu-ray, SACD and apps. EMI’s exhaustive reboot campaign suitably begins with the best concept album ever Dark Side of the Moon, which arrives Monday in dual Immersion and Experience editions, alongside comprehensive physical and digital Discovery boxes featuring Pink Floyd’s 14 remastered studio albums and a photo book.

It continues Nov. 8 with Immersion and Experience editions for Pink Floyd’s meditative classic Wish You Were Here, as well as the clumsy compilation A Foot in the Door: The Best of Pink Floyd, and Feb. 28 with the same for Waters’ operatic exegesis The Wall.

But will it fly?

“Whatever differences there have been, we have been with EMI for all of our recording lives, particularly in Europe,” said Mason. “They led on this project, and I think they’ve done a great job. In this day and age, there is as yet no alternative to record companies. So it’s far better to be with the devil you know than the devil you don’t. That may not sound like a compliment!” 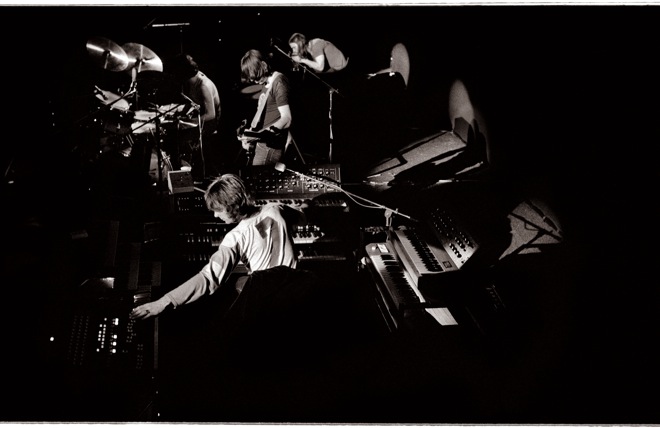 Regardless of the launch window, there’s never a terrible time to discover — or rediscover, depending on your familiarity level — Pink Floyd’s considerable legacy.

After merging psychedelic light and live shows, providing film scores for Barbet Schroeder’s More and Michelangelo Antonioni’s Zabriskie Point and even improvising a soundtrack during the BBC’s live coverage of the Apollo 11 moon landing in the 1960s, the Floyd entered the ’70s determined to explode music’s multimedia possibility. And its own profile. Dark Side of the Moon was specifically designed to discard the band’s previously esoteric experiments using found sound — colloquially known as its “Household Objects” period, only one of many unreleased Pink Floyd productions — and aim for the big time with an ambitious but accessible crossover. It worked, from the bluesy excess of “Money” to the clock loops of “Time.”

‘Dark Side of the Moon was right-place-right-time, a bit like Sgt. Pepper’s in that it’s almost seamless.’

“I’m still very proud of it,” Mason said. “Dark Side of the Moon was right-place-right-time, a bit like Sgt. Pepper’s in that it’s almost seamless. But it was so much more polished than anything we’d ever done before.”

After Dark Side of the Moon, Pink Floyd’s outsized ambitions began to come to life in mind-frying live spectacles featuring special-effects, complementary films and lyrically heady, musically epic critiques of industry (Wish You Were Here), capitalism (Animals) and alienation (The Wall). An acrimonious conflict between Waters and Wright, Mason, and Gilmour (Barrett’s replacement) over who controlled the band’s direction and revenue destroyed the group’s cohesion in the early ’80s. The latter three legally won outright stewardship at the end of the decade.

Since then, Waters and Gilmour have rarely spoken, although they buried the hatchet to perform together in 2005 for the first time in 24 years at Live 8 with Mason and Wright. The rest is deafening silence.

Enter EMI’s redesigned, remastered rollout, which could help soothe the label’s burn marks left behind by multiple lawsuits from the Beatles, turmoil under the management of Terra Firma Capital Partners, and all-star defections from Paul McCartney, the Rolling Stones, Radiohead and more.

“This is a unique collaboration between EMI and one of the most creative and influential bands in history,” EMI CEO Roger Faxon said in a press release. “These exciting new releases will allow music fans to rediscover their incredible legacy and demonstrate that an appreciation for artistic quality never goes out of fashion.”

Perhaps, but an appreciation in price might not provide the type of artistic appreciation the band is hoping for. We’ll know more once the Immersion and Experience editions of Wish You Were Here and The Wall arrive, both of which feature sensational animated shorts from repeat Floyd collaborator and The Wall artist Gerald Scarfe. Remastered reboots and archival blowouts are all Floyd early adopters and late bloomers have, that is until Gilmour, Mason and perhaps even Waters decide that hell has frozen over and it’s time to make another album or hit the road again as a functionally adjusted unit. But don’t hold your breath.

“We have no plans,” explained Mason. “I think David probably wants to do another solo album; that may be his next move. And I think that after that, we’ll see how he feels. At the moment, he is not interested, and I think Roger, even if he was interested, has got another nine months or so of touring his version of The Wall. So there’s nothing in the cards. I have to say unfortunately, because I’d be very happy to pack my knife, fork, spoon and drumsticks and head out.”

But to quote the screaming Gilmour in The Final Cut’s profane “Not Now John,” fuck all that, we’ve got to get on with these, you’re likely thinking. These being of course the freebies available below in Wired.com’s Dark Side of the Moon prize pack, which includes an Immersion edition of Pink Floyd’s timeless masterwork, signed by Mason, as well as a “Why Pink Floyd?” t-shirt and poster, and a making-of book.

Plug into the comments section and let us know how you feel Pink Floyd continues to inform 21st-century popular and technological culture. The most convincing nerd in the nexus wins the prize pack outright. Entries must be received by 12:01 a.m. Pacific on Oct. 7, 2011. Winners must live in the United States. Read the fine print below, breathe in the air and don’t be afraid to care, Floyd fans. Also, have a cigar. (OK, I’m done now.)

Read 5156 times
Published in News Technologique-Tech News
More in this category: « Try Before You Fly: How Dreamliner Pilots Train Without Lifting Off Drummer Nick Mason On Pink Floyd?s Tech, Music, Future »
back to top